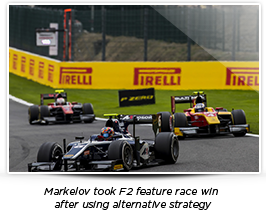 Feature Race, the winner: Charles Leclerc was a dominant winner on the road, starting on the P Zero Yellow soft tyre before switching to the White medium on lap 10. However, the Prema-run Ferrari junior was subsequently excluded post-race, although he maintains his championship lead. The exclusion handed victory to Artem Markelov (Russian Time).

Feature Race, alternative strategy: Starting ninth on the grid, Markelov deployed the alternative strategy to Leclerc and most of the other frontrunners, beginning the race on the medium tyre and pitting for the soft on lap 15. He rejoined the race in sixth place but used the superior performance of the soft to charge towards the front, making a final corner pass on Oliver Rowland (DAMS), who was excluded for the same infringement as championship rival Leclerc.

Sprint Race, the winner: Sergio Sette Camara shot from third on the grid at the start to win the Sprint Race, with all the drivers on the medium tyre and no mandatory pitstops. After his great start, the Brazilian rookie (MP Motorsport) managed his tyres well for his maiden win. Leclerc finished fifth from 19th on the grid. 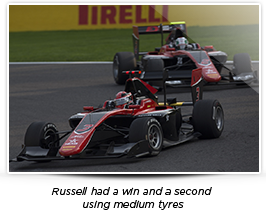 Feature Race, the winner: Mercedes junior George Russell won the opening race after starting on pole position, with all drivers on the medium tyre. His ART team-mate and Honda protege Nirei Fukuzumi slipstreamed into the lead on the first lap, but Russell was able to reply without compromising his tyres. Another ART driver, the Renault Sport Academy’s Jack Aitken, finished second after a late battle with Fukuzumi.

Sprint Race, the winner: Giuliano Alesi scored his third consecutive Sunday win from second on the reversed grid. Russell had another strong drive to finish in second place from eighth on the grid and increase his championship advantage.

Pirelli’s head of car racing Mario Isola: “In Formula 2 we saw a dominant performance on the road from Leclerc, who was able to maintain a very high pace despite the need to manage the tyres on a circuit that places many demands on them. Markelov made the alternative strategy work in a thrilling finish against Rowland, and was ultimately rewarded with the win. Tyre management was also a factor in GP3, with Russell preserving his rubber well for two strong results, on the longest circuit on the calendar.”

Formula 2 and GP3 move straight on to another famous circuit next weekend: the high-speed Monza in Italy.