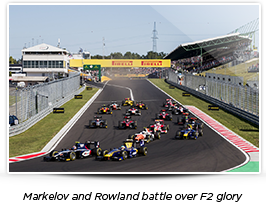 Feature Race, the winner: Renault Junior driver Oliver Rowland (DAMS) won, starting on the faster P Zero Yellow soft tyre and then switching to the medium on lap 11. His closest rival, Artem Markelov (Russian Time) adopted a similar strategy and tried to pass Rowland with three laps to go, having conserved his tyres, before going off and retiring.
Feature Race, alternative strategy: The opposite strategy was adopted by Ferrari Junior Charles Leclerc, who was dropped to the back of the grid for a technical infringement after qualifying on pole. The Prema driver did a long first stint on the medium to go from last all the way to first. He then switched to the faster soft on lap 21, emerging 11th, and fought his way back to fourth by the finish, maintaining his grip on the championship.

Sprint Race, the winner: The winner of the Sprint Race, with the entire field running on the P Zero White medium (and no obligatory pit stops) was Honda junior driver Nobuharo Matushita, who stormed into the lead from the second row of the grid and never lost the advantage. With track temperatures over 50 degrees centigrade, he managed thermal degradation perfectly to take a comfortable win. 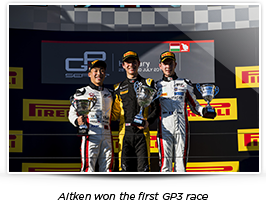 Feature Race, the winner: Another Renault Junior, Jack Aitken, won the race on Saturday afternoon from pole, which was held in cooler conditions at 17:30. Aitken headed an ART Grand Prix one-two-three, with all the drivers on the medium tyre. The race was interrupted by a safety car and a virtual safety car, with Aitken now moving up to second in the championship behind George Russell (ART) who was unable to take the start.
Sprint Race, the winner: After ART Grand Prix locked out the podium on Saturday, Trident took the top four spots in the Sprint Race on Sunday morning, with Giuliano Alesi – the winner last time out at Silverstone – leading his team mates home. There were three punctures and two broken rims during the race, caused by external contacts.

Pirelli’s head of car racing Mario Isola: “In Formula 2, drivers had to cope with high track temperatures that made tyre management a priority, especially in the Sprint Race with no mandatory pit stops. Leclerc’s race, meanwhile, showed just what can be achieved using strategy even when starting last. Thermal degradation was high on the Formula 2 soft compound, while the medium was more consistent, which was exactly the target for this series. Degradation was less in GP3, but we also had safety cars, both real and virtual, that increased tyre life.”

Next races Formula 2 and GP3 will head next to the legendary Spa-Francorchamps circuit in Belgium from August 25-27.

Copyright-free videos, photos as well as latest media news are available for editorial use from: www.pirelli.com/f1pressarea (registration required).Follow us on Twitter @pirellisport or Facebook: Pirelli Motorsport. Please also visit the Pirelli website for more information on the company: www.pirelli.com.