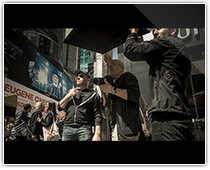 The renowned fashion photographer Peter Lindbergh will shoot the new 2017 Pirelli Calendar. A portion of the images will be taken in New York. This will be the third time the 72 year-old photographer shoots the Pirelli calendar, which he previously photographed in 1996 and 2002, always in the United States. In 1996, on the beaches of California, he captured the essence of renowned models such as Eva Herzigova, Carré Otis and Nastassja Kinski. Then again in 2002 on the streets of Hollywood, he framed, among others, Kiera Chaplin, Brittany Murphy and Mena Suvari. Most recently, together with Patrick Demarchelier, he participated in the celebratory project for the 50th anniversary of The Cal™: creating the iconic image of top models Alessandra Ambrosio, Helena Christensen, Isabeli Fontana, Miranda Kerr,  Karolina Kurkova and Alek Wek.