Pirelli and Kawasaki win at the Bol d’Or 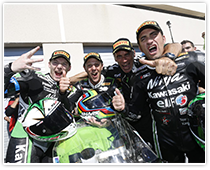 For the fourth year in a row, the winning duo of Pirelli and Team Kawasaki SRC have won the Bol D’Or, the prestigious 24-hour endurance competition that is part of the FIM Endurance World Championship and which this year, after a fourteen year absence, returned to the renowned Paul Ricard di Le Castellet circuit. Pirelli's efforts for this Bol d’Or, which attracted more than 40,000 spectators on site, was significant: it brought an impressive 300 tyres to the track to equip the 20 teams (out of a total of 55 teams registered) which chose to use the DIABLO™ Superbike range tyres. In this 79th edition of the Bol d’Or, riders Fabien Foret, Gregory Leblanc and Matthieu Lagrive of Team Kawasaki SRC won the race on the number 11 ZX10R with Pirelli DIABLO™ Superbike tyres a full two laps ahead of the second placed team. 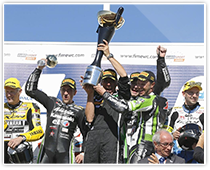 But this was not the only satisfaction of the weekend for Pirelli and the Akashi-based manufacturer: team Traqueur Louit Moto 33, with a final fifth place on the Paul Ricard circuit, clinched the Endurance Superstock World Cup title. During the race the Kawasaki SRC team made 27 pit stops using various Pirelli tyres in the DIABLO™ Superbike slick range. For Pirelli and Team Kawasaki SRC this is not only the fourth consecutive win in this competition but also the eighth win in the last four years of the FIM Endurance World Championship if you also consider the four victories taken at the Le Mans 24-Hour from 2010 to the present.

Pirelli and Kawasaki win at the Bol d’Or
Newsroom