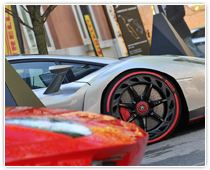 Lamborghini has chosen to celebrate its 50th anniversary along with Pirelli. Indeed, the Pirelli Foundation was the venue for the press conference at which the manufacturer from Casa di Sant'Agata Bolognese kicked off its anniversary celebrations in Milan on 7th May. Hangar Bicocca then hosted a dinner to mark the launch of the tour of 350 Lamborghinis that had come from all over the world in order to cover 1200 km of Italian territory and thus take part in the most memorable Lamborghini rally ever. Pirelli’s association with Lamborghini dates back to 1963, a year in which Ferruccio Lamborghini asked the company from Bicocca to supply the tyres for the car maker’s first ever vehicle, the 350 GTV. Pirelli Cinturato HS (High Speed) tyres were specially designed to handle the high speeds of the supercars that first appeared in the Sixties. In 1966 the Miura, fitted with a new family of Cinturato HS tyres, the CN72, marked the transition to a quieter and more comfortable tread pattern, chosen as original equipment for all subsequent Lamborghini models, including the Espada in 1968. A few years later, it was once again the Miura to request a revised Series 70 low profile tyre (i.e. with a low aspect ratio) in order to improve roadholding. The introduction of the new Cinturato CN73 paved the way for the Pirelli P7, chosen by Lamborghini in 1971 as original equipment for the new Countach, the supercar that reigned supreme throughout the Seventies. In 1988, the Countach Anniversary edition, introduced to mark the company’s 25th anniversary, was one of the first supercars to be fitted with the new Pirelli P Zero™. Between 1986 and 1988, Lamborghini produced the LM002 SUV for which Pirelli created the Scorpion range. 1990 saw the arrival of the Lamborghini Diablo that had a production run of just 3000 all fitted with Pirelli P Zero™, whilst the turn of the century was dominated by the Murciélago (2002) and Gallardo (2003) with their P Zero™ Rosso fitments. It was the Lamborghini Gallardo again that also launched Pirelli’s Winter Sottozero™ II in 2008. 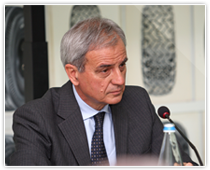