Pirelli took to the field with Javier Zanetti and other great champions who made football history for the charity initiative Zanetti and Friends Match For Expo Milano 2015. The match was held at the Meazza Stadium on May 4thand gave a symbolic kick-start to the Expo. Pirelli was top partner for the charity event and jersey sponsor of one team, while the other was sponsored by Alfa Romeo, the other top partner for the match. Pirelli’s support for Zanetti and Friends Match For Expo Milano 2015 reaffirms the company’s commitment to the promotion and dissemination of sport as an instrument of integration and dialogue between different cultures and generations. Its participation in this event follows the support Pirelli gave the Inter-religious Match for Peace organized by Zanetti’s PUPI Foundation and Scholas Occurrentes in 2014 and underlines its commitment to promoting diversity, multiculturalism and dialogue. 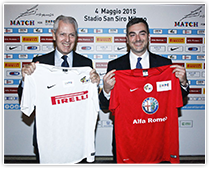 Alongside the automotive sector, Pirelli has strong ties with sport, especially with football.   The bond between Pirelli and football dates back to 1877, when the Italian company launched the production of sport rubber products, which in 1922 evolved into a patent for rubber coating of football balls.  In 1926, Piero Pirelli – son of the company’s founder – fostered the construction of the San Siro Stadium.  And in 1995, Pirelli’s history intertwined with that of Inter, one of the most important and famous football clubs worldwide.  Pirelli has been supporting the Inter Campus, a project born in Italy and then exported around the world with the aim of helping vulnerable children providing them with academic and sport related education.