Pirelli announces the solutions for the Phillip Island round; Alex Lowes on his Suzuki in Superbike and Jules Cluzel on his MV Agusta in Supersport are the fastest in the season opener tests

The two days of testing on the Australian track ended today for the eni FIM World Superbike Championship riders who tried the various solutions that the Italian tyre manufacturer brought for this demanding first round of the season. 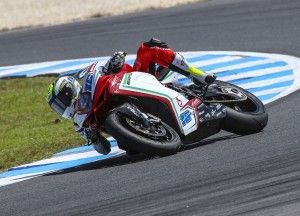 The Superbike and Supersport riders finished two days of testing on the Phillip Island circuit today. Dominating the Superbike class both days was Alex Lowes on his Suzuki GSX-R1000 for team Voltcom Crescent Suzuki, stopping the clock at 1'30.859 in the third testing session for his best time. In Supersport on the other hand the Frenchman astride his MV Agusta, Jules Cluzel, was the best rider on the track, lapping at 1'32.967 in the final session. Giorgio Barbier, Pirelli Moto Sports Activities Director, had this to say at the end of the two days of testing: “By now we all know that Phillip Island puts tyres to a hard test and this is why working together with the teams is just as important as the riders' style and the bike settings, both determining factors. Speaking of which, I would remind everyone that Pirelli recommends keeping the tyres in heat covers at a temperature of 95-100 degrees for an hour and, in any case, no longer than two hours in order to prevent the rubber from possibly losing its properties if subjected to excessive and prolonged heating. As for tyre pressure, it is important not to drop too low in order to obtain proper operating temperature as well. Having clarified this very important point, the weather will certainly also play an important role. The tests were conducted in relatively low temperatures, between 25 and 36 degrees on the tarmac, but Phillip Island has historically gotten us used to much higher temperatures in the past.” In the Superbike class each rider will be able to choose from 5 solutions on the front and 7 on the rear for a total of 72 tyres, 32 on the front and 40 on the rear. As always, in addition to theDIABLO™ Superbike slicks, the riders will be able to count on the intermediate DIABLO™ Wet and DIABLO™ Rain solutions. On the front Pirelli has chosen, in addition to the SC1 and SC2 compound solutions, slicks in the SC1 S1699 development solution, a tyre that made its début at Aragon and which was then the most used last season. Both this last solution and the SC2 were also used in the tests conducted on Monday and today. For the rear Pirelli has confirmed the two development solutions used during the tests: the S1633, the go-to race tyre last year for all the riders, and the new S1687, another SC1 compound solution but with higher mechanical resistance than the standard SC1 from last year. In addition to these there are two new specifically developed solutions: the T1105 and the T1392, two solutions that use a blend similar to that of the S1687 but which differ because of the different structural materials intended to improve tyre performance and limit overheating, especially on the left side of the tread, one of the main problems that the rear tyres face on the Phillip Island circuit. Also, for Superpole on Saturday, in addition to the race tyres all the riders participating in one of the two Superpole sessions will be able to use a qualifying tyre in a supersoft compound that can guarantee maximum performance for a flying lap as they try to put their best times on the board and earn a good spot on the starting grid. In Supersport Pirelli's goal with the solutions brought is the same with the difference that, compared to Superbike, the lap times are longer and therefore the stress on the tyres, in this case grooved and not slicks, is also greater. On the front the riders will have their choice of one of two solutions, the same used in the tests: the standard SC1 and the SC1 S1485 development solution that was used for the first time last year at Misano with reasonable success. For the rear, in addition to the new T1538 development solution already used in the tests, riders will be able to count on yet another new development solution, the T1394,two 190/60 size specifications (instead of the standard 180/60 size). This means also increasing the size of the tyre's contact area with the tarmac and this should help to dissipate the strong thermal stress that the tyres suffer on this track.

Pirelli announces the solutions for the Phillip Island round; Alex Lowes on his Suzuki in Superbike and Jules Cluzel on his MV Agusta in Supersport are the fastest in the season opener tests
Newsroom