In SBK® Race 2 the Welshman brings home a double win for Ducati after success in Race 1 yesterday, relegating the Kawasakis ridden by Sykes and Rea to third place, first win of the season in WorldSSP for Multiple World Champion Kenan Sofuoglu astride his Kawasaki 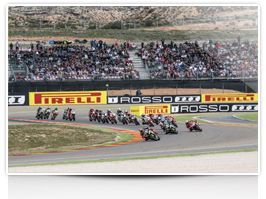 The first European round of the MOTUL FIM World Superbike Championship, where Pirelli is Event Main Sponsor and which, for this reason, took on the name Pirelli Aragón Round, came to an end today at the MotorLand Aragón circuit with a win by Chaz Davies (Aruba.it Racing-Ducati) in Race 2 that brings home the first double win of the season for Ducati after success in Race 1 yesterday. Also held today were the FIM Supersport World Championship race and the opening races for the Superstock 1000 FIM Cup and WIL Sport European Junior Cup categories. As for the solutions Pirelli brought to this round, in the top class the rear DIABLO™ Superbike standard SC0 was the undisputed protagonist and it demonstrated once again that it adapts well even at temperatures that are less than ideal for its use. In Supersport, on the other hand, the DIABLO™ Supercorsa standard SC1 compound version on both the front and the rear was the combination most of the riders on the grid used. In Race 2 Tom Sykes (Kawasaki Racing Team) got off the line well, followed closely by teammate Jonathan Rea, Chaz Davies (Aruba.it Racing – Ducati), Sylvain Guintoli (Pata Yamaha Official WSBK Team) and the other Ducati rider, Davide Giugliano. 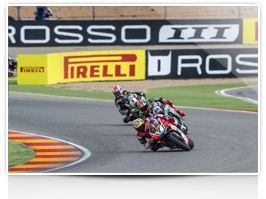 As had already happened in Race 1, Chaz Davies did not take long to react and by the second lap he had already overtaken Jonathan Rea and then Tom Sykes, moving into the lead where he would stay until the end of the race. During the tenth lap Jonathan Rea managed to get the better of teammate, Tom Sykes, moving into second place behind the Welshman. In the meantime, Xavi Forés (Barni Racing Team) clawed his way up from the rear to move into fourth place ahead of Michael Vd Mark (Honda World Superbike Team) and Jordi Torres (Althea BMW Racing Team). In the fourteenth lap we watched Jordi Torres overtake Vd Mark and a lap later Jonathan Rea went wide on a turn, allowing his teammate to get by. At the end of the race the script read much like that of Race 1 on Saturday: Chaz Davies crossed the wire first with an advantage of almost six and a half seconds ahead of Sykes, finishing second today, and more than nine ahead of Rea, second yesterday and third today. The Welsh Ducati rider also won the Pirelli Best Lap Award for the fastest race lap at 1’51.053. 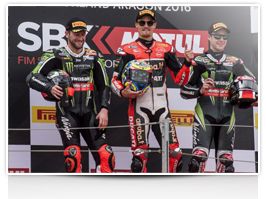 Race 2 standings: 1) Chaz Davies (Aruba.it Racing – Ducati) 2) Tom Sykes (Kawasaki Racing Team) 3) Jonathan Rea (Kawasaki Racing Team) 4) Xavi Forés (Barni Racing Team) 5) Jordi Torres (Althea BMW Racing Team) 6) Davide Giugliano (Aruba.it Racing – Ducati) 7) Michael Van Der Mark (Honda World Superbike Team) 8 ) Alex De Angelis (IodaRacing Team) 9) Sylvain Guintoli (Pata Yamaha Official WSBK Team) 10) Alex Lowes (Pata Yamaha Official WSBK Team) … In the third race of the FIM Supersport World Championship season, four-time World Champion Kenan Sofuoglu (Kawasaki Puccetti Racing) was back on the top step of the podium. For the Turkish rider it was a perfect weekend that began yesterday with success in Superpole and continued today with his domination of the race from wire to wire. Unfortunately, the race lost two riders straight away, Aiden Wagner (GRT Racing Team) and Roberto Rolfo (Team Factory Vamag) who, although on the starting grid, were unable to start due to technical problems, as well as another, Patrick Jacobsen (MV Agusta Reparto Corse) who crashed out on the first corner. During the second lap Javier Orellana (WilSport Raceday Honda) also crashed out of the race and Lorenzo Zanetti (MV Agusta Reparto Corse) followed him to the garage a lap later. A mistake in the ninth lap cost Jules Cluzel (MV Agusta Reparto Corse) three positions, relegating him from third to sixth. Randy Krummenacher (Kawasaki Puccetti Racing) fell in line solidly behind Kenan Sofuoglu, followed by Spaniard Nicolas Terol (Schmidt Racing), and that was to be the finishing order under the chequered flag with Jules Cluzel who, finishing fourth, did not quite make it onto the podium. With this second place race finish and his win at the Australian opener, Randy Krummenacher is the current Championship leader with 58 points ahead of the Turkish Kawasaki rider's 45 and Jules Cluzel who boasts 38 points after three races. 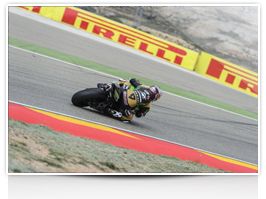 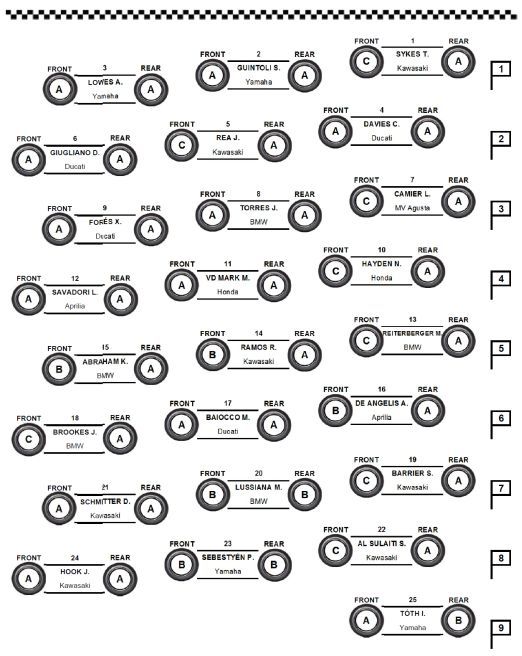 In Race 2 of the MOTUL FIM World Superbike Championship, some of the riders made changes, especially on the rear, but the riders on the first three rows basically confirmed the solutions they had used in Race 1, with the exception of Alex Lowes who opted for the standard SC1 on the front instead of the development SC1. On the rear, compared to Race 1 there was a clear tendency toward the standard SC0, used by 15 riders yesterday and by no less than 22 today. As for the front, the S1699 SC1 development solution remained the most popular. In the FIM Supersport World Championship, all 34 riders on the grid chose the DIABLO™ Supercorsa standard SC1 medium compound tyre for the rear, and most of the riders also chose the standard soft solution, the SC1 for the front, used by 24 of the riders on the grid. The remaining 10 riders opted instead for the S1485 SC1 development solution.