Pirelli Aragón Round: the brand of the elongated P is the Event Main Sponsor for the first European round of the MOTUL FIM Superbike World Championship

For the third round of the series, which will also see the season debut of the Superstock 1000 FIM Cup and WIL Sports European Junior Cup classes, Pirelli brings on track most of the standard solutions of the range for a total of 4484 tyres and will present to the international press the new supersport tyre DIABLO ROSSO™ III

This weekend the Spanish circuit of MotorLand Aragón will host the MOTUL FIM Superbike World Championship for the sixth consecutive year.

For Pirelli this event, the first of the year to be held in Europe and to host all classes of the Championship, will be particularly important. Firstly because the tyre brand will be Event Main Sponsor of the Spanish round and will therefore be named the Pirelli Aragón Round. This sponsorship, which this year will be replicated at the Italian round of Riviera di Rimini at Misano World Circuit in April and in Germany held in Lausitzring in September, confirms the interest of Pirelli in investing in the production derived-series as a development platform of its tyres and as an international showcase for the brand.

Also at Aragón, on Monday after the race weekend, the international press will have the chance to test the new supersport tyre DIABLO ROSSO™ III, developed thanks to the experience and knowledge acquired in these thirteen years as Official Tyre Supplier of the FIM Superbike World Championship.

The Ciudad del Motor de Aragón, commonly known as Motorland Aragón, is a circuit located in the village of Alcañiz, a small town in the Spanish autonomous community of Aragon, designed by renowned German architect Hermann Tilke and opened in 2009. The circuit, if used on its full configuration, is 5344 metres long but, as used by the MOTUL FIM Superbike World Championship, the lap has a length of 5077 metres.

The track has a quite aggressive asphalt especially, but not only, on the rear tyres. Its surface has a strong roughness which, combined with high temperatures not too high and typical of April and the possible presence of sandy debris carried by the wind, can become an important unknown factor especially in the early morning hours causing severe wear and tear from cold. The sand that lay down on the asphalt prevents optimum contact between the tyre and the asphalt and thus causes loss of grip in the distance and drifts towards the center of the curve.

At Motorland Aragón, Pirelli, to meet the needs of all classes, brought 4484 tyres and will provide riders mostly with DIABLO™ Superbike and DIABLO ™ Supercorsa SC standard tyres with some new development solutions.

The solutions for the Superbike and Supersport classes

Spain will host the third round of the MOTUL FIM Superbike World Championship which will also be the first stage for the Superstock 1000 FIM Cup and the WIL Sports European Junior Cup classes. In Australia and Thailand only the World Superbike and World Supersport classes ran.

As regards the SBK® class in total there will be seven slick DIABLO™ Superbike solutions, three front and four rear, in addition to the rear qualifier tyre that may be used only by riders that will access into the second Superpole session. At the front there will be the development SC1 S1699, available for the riders in the first two rounds as well as  the front solution most used in 2015, and the two standard solutions of the range, the SC1 and SC2. The SC1 this year takes to the field for the first time, in the softer front compound in the range designed for low external temperatures and moderately severe tracks. It maximizes the surface contact and the "presence" of the front as well as being the solution preferred by riders who prefer a predictable tyre that tells them when they are approaching the grip limit. It's usually preferred to the SC2 in the case of circuits with significant bumps because it guarantees the absorption of shock and vibration (chatter) in addition to providing a greater grip especially when cold. The SC2, already present in the first two rounds, is the medium hardness solution that is optimal for high external temperatures because it provides resistance to the tread band and favours the aggressive riders who prefer the compactness of the tread band in addition to greater solidity, stability and steering precision at corner entry.

As for the rear, there will be first of all the standard SC0 which already appeared in Thailand witha soft compound which is ideal for smooth asphalt and high temperatures offering the maximum grip on smooth asphalt and traction development at high temperatures. It also offers higher stability to thermal degradation of performance. It is the rear solution by far most used in the World Superbike Championship. The standard SC1, which has a medium hardness of the rubber compound which is positioned halfway between the soft and the hard solution, is instead the most sought solution when, perhaps too cold, or abrasive asphalt, the SC0 cannot be used. The third solution is represented by the development SC1 U0989, more sustained on the sides to provide greater support to the rear. The fourth and last alternative is the standard SC2, the hard solution of the range that is used with severe and abrasive asphalt and/or in low external temperature conditions. Thanks to its characteristics the hard compound is able to ensure excellent resistance to cold tearing (or tearing of the rubber from the tread band) and wear. 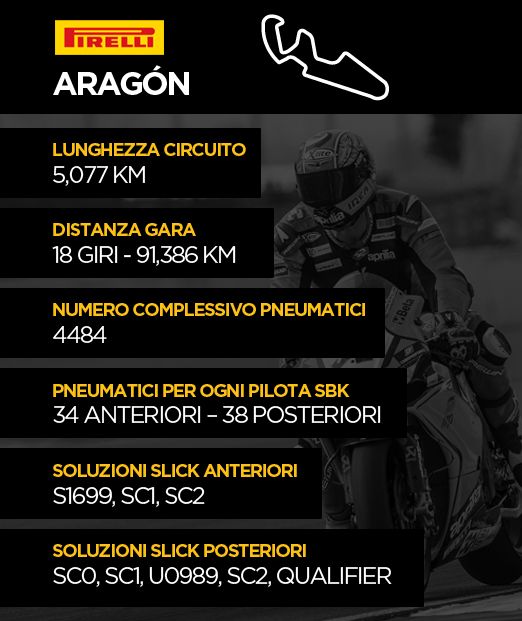 In WorldSSP there will be the DIABLO™ Supercorsa SC range plus two development solutions. To the front there will be both the standard SC1 and SC2 in addition to the development S1485 that offers greater support in the approach to bends in favour of a better steering precision. At the rear instead there are two options: the standard SC1, already present in the first two rounds which provides a medium hardness of the compound which is positioned halfway between the soft and the hard solution, and the development SC1 U0563, which compared to the standard SC1 should provide even greater robustness.

All classes of the MOTUL FIM Superbike World Championship have, in addition to dry tyres and in the case of adverse weather conditions, access to rain tyres DIABLO™ RAIN and intermediate tyres DIABLO™ WET.

The 2015 Pirelli statistics for Buriram

• Number of solutions (dry, intermediate and wet) for the Superbike class: 5 front and 7 rear

• Number of tyres available for each Superbike rider: 34 front and 37 rear

• Number of solutions for the Supersport class (dry, intermediate and wet): 4 front and 5 rear

• Number of tyres available for each Supersport rider: 22 front and 25 rear

For the third round of the series, which will also see the season debut of the Superstock 1000 FIM Cup and WIL Sports European Junior Cup classes, Pirelli brings on track most of the standard solutions of the range for a total of 4484 tyres and will present to the international press the new supersport tyre DIABLO ROSSO™ III

Pirelli Aragón Round: the brand of the elongated P is the Event Main Sponsor for the first European round of the MOTUL FIM Superbike World Championship
Newsroom