The new 17 inch Diablo Superbike SC0 tyres could be the race solution for the rear in the event of high temperatures. Alternatively the riders will be able to count on various SC1 and SC2 blend solutions, as well as the intermediate and wet tyres 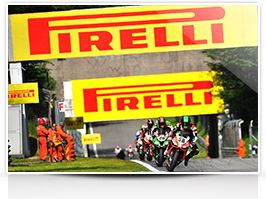 Pirelli embarks on English soil armed with the results and satisfactions obtained in the first rounds of the eni FIM World Superbike Championship, but well aware that there is still plenty of season ahead full of challenges and problems. At Donington Park, the cradle of the World Superbike Championship since the very first round of the factory derivative championship was raced here in 1988, historically the weather has been the biggest unknown factor and, precisely for this reason, the tyre manufacturer from Milan will provide the riders with a vast choice of solutions that, in terms of compound hardness, covers the entire range available. Thanks to the experience gained throughout the years as sole supplier for the World Superbike Championship, but also in the British Superbike Championship, in addition to their standard tyres, Pirelli has developed some solutions for both the Superbike and Supersport class for the rear in a medium compound which, especially in cases of cold temperatures, could prove to be priceless for the teams and riders. On the other hand, in the event of pleasant weather, the riders will almost certainly choose the standard SC0 solution because it performs the best and is capable of providing the most grip. However, it is less protected from the cold and therefore more prone to cold tearing if used in temperatures which are too low. For the Superbike Championship, currently led by Aprilia rider Sylvain Guintoli (137 points) followed by team mate Eugene Laverty (124), Englishman Tom Sykes (119) on Kawasaki and Italian Marco Melandri (96) on BMW, the round could shuffle the deck further in the event of rain because the English riders know this track quite well and they are specialists in wet riding. The Donington Park circuit was built in 1931 specifically for motorcycle racing. During World War II activities were interrupted and the track was closed until 1971 when it was reopened by a local businessman who was a motor sports enthusiast. 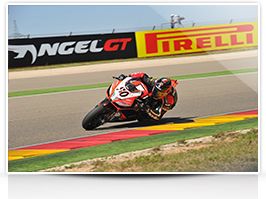 The track is 4,023 metres long with 7 right-hand turns and 5 left-handers. It runs clockwise and the pole position rider starts on the left. Maximum slope is 8% and the turn radii go from a minimum of 24 metres to a maximum of 333 metres. Donington Park is located in the Eastern Midlands 180 km north of London near Sherwood Forest and it was built in a natural amphitheatre that is quite conducive to watching the races for the spectators. It is a fairly fast track with a lot of uphills and downhills and some fast turns that require sharp braking and acceleration and put the riders to a hard test. The races are often held in the rain which makes the asphalt slick and slippery and that increases the riders' efforts, at the same time highlighting their wet riding skills. Donington Park from a tyre point of view: The British Donington Park circuit is a mixed type track. It is partly made up of fast lines with various uphills and downhills (i.e. Holly Wood) and partly of slow turns with straight stretches in between which require sharp braking and acceleration such as the Melbourne Hairpin (turn 10). Then, on the straight stretch coming out of the Coppice ( turn 8 ) the highest acceleration coming out of a turn is reached. But the most interesting elements of the circuit are the two medium turns that break up the straight stretch opposite the finish (Old Hairpin and McLeans Corner). The turns are at the same time abrupt like a chicane but fast like a long turn, with the bikes never dropping below 100 kph. The rider can make up significant time increasing minimum speeds along the kerb and by navigating these two turns expertly can result in earning precious tenths of a second. 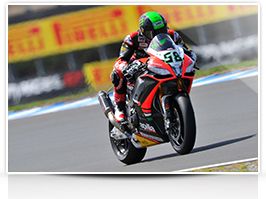 If compared to other tracks, Donington Park is a circuit where extremely fast speeds are not reached. The maximum speed is just above 260 kph and the average speed is about 160 kph. This is an abyssal difference compared to the 340 kph at Monza or the 320 kph at Phillip Island, with average speeds of 200 kph or 180 kph. Combined with the typical local weather conditions, this translates into an extremely cold operating temperature for the tyres: in fact, the surface temperature oscillates from a maximum of 110°C to an extremely low minimum of 50°C. The Diablo Superbike tyres must bring out their maximum flexibility, guaranteeing the usual 55° lean angle and the usual lateral and combined accelerations of 1.4 Gs, despite the fact that the operating temperature will be the same as normal street use. Especially in the first part of the circuit great stability is required for the front end. Consequently the main goal of the front tyre must be to hold its conformation as much as possible and to guarantee the support needed to manage downhill turns. Particularly when hot, where the elasticity and rigidity of the tyre decrease, the use of a rigid front tyre may prove to be necessary such as, for example, the SC1 S41 and SC2 R982 solutions. On the other hand, the rear tyres are affected mainly by the sharp and violent acceleration phases which are typical of the track, especially coming out of the Coppice. In cold weather conditions the tread compound, especially the softer ones, struggles to reach proper operating temperatures and, because of the high rigidity properties, risks suffering lacerations and surface tears in acceleration. In these cases it is advisable to use more mechanically robust solutions on the rear such as the SC1 R831 or the SC2 R1300. Wear from tearing tends to decrease greatly with high temperatures. On the other hand, however, in these conditions the track generally provides very poor grip. Therefore, in order to guarantee more precise lines, the riders can resort to using softer solutions such as the SC0 R1261 or the SC1 R828, better able to penetrate the road surface and to guarantee correct traction. Donington Park from a technical point of view: 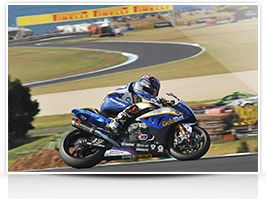