Pirelli at EICMA 2012 with tattooed tyres 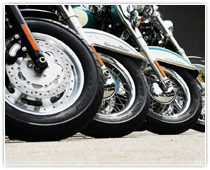 Pirelli’s attendance at the 2012 International Motorcycle Exhibition (EICMA) leaned heavily towards custom. Pirelli was present with Night Dragon, its leading custom product, and an event combining motorcycling with the art of tattooing: this has led to a new art form, the tattooed tyre. . 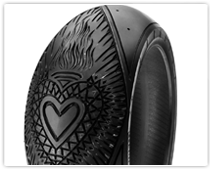 Pirelli launched an “artistic” challenge in order to portray the artwork of custom tattoos on tyres, this resulting in the idea of holding tattooing sessions on the tread of Pirelli tyres during the show. The design is first skilfully carved in the tyre using a gouge and then painted with acrylic enamels. The result produces veritable impromptu works of art on the tyre, these being just for show and of a fleeting nature due to the properties of the mixture’s components, but at the same time capable of arousing excitement and interest in the viewer. A show leaning towards art for Pirelli, art that also played a leading role in the Ridersnight Gommati event organised by Riders Italian Magazine in association with Pirelli and the Pirelli Foundation. 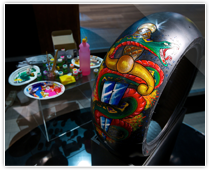 The evening’s theme was once again the tyre that appeared in all its forms along a special itinerary. This itinerary included an exhibition specially prepared by the Pirelli Foundation that with 24 illustrations of its 140-year history told the story of its artistic and cultural heritage, explaining how the tyre has been both author and example of change. With its imposing presence in the EICMA custom area, Pirelli, the established leader in the racing and sports segment, wanted to send a message to motorcyclists who love the world of custom, demonstrating how the experience acquired from racing can be transferred to a product, the Night Dragon, capable of offering custom bikes not just high mileage and stability, but also excellent grip and handling typifying Pirelli’s sporting DNA.