The MOTUL FIM Superbike World Championship heads back to Europe for the third round of the season, to the Pirelli Aragón Round, which will also see the riders of all the classes of the Championship on track for the first time

Next weekend, Pirelli will return to the track for the third round of the MOTUL FIM Superbike World Championship which will be held in the Spanish track of MotorLand Aragón from Friday 13th to Sunday 15th April 2018 and which will see all the classes of the Campionship on track for the first time this year.

On the tyres side, both the WorldSBK and WorldSSP riders will be able to count on new development solutions, moreover, as already seen last years, the tyre brand will be starring in its role as Event Main Sponsor of the renamed Pirelli Aragón Round.A sponsorship deal which, in addition to the consistent presence of the Milanese tyre brand alongside teams and riders, confirms Pirelli’s commitment and enthusiasm to keep investing in the in the production derived-series as a development platform for its tyres and as an international showcase for the brand.

The Spanish track is characterized by the high level of abrasiveness of the asphalt affecting especially the rear tyres. The surface of the Aragón track has in fact a very marked roughness which will probably be combined by cooler temperatures, typical of the month of April. The possible presence of residual sand carried by the wind might further accentuate this abrasiveness. The sand that is deposited on the track surface prevents the optimal contact between the tyre tread and asphalt, and it might cause loss of grip and drifting towards the center of the corner. The rear solutions chosen by Pirelli for this track are consequently aimed at finding the right balance between stability and compound stiffness and the grip they can express when warmed-up.The front tyres, on the other hand, besides dealing with the wear caused by the asphalt’s abrasiveness, will have to cope with the heavy braking section on the straight opposite the pit lane. Also the steep slopes which put a high loading on the front tyre, just like the fast corners and the multiple changes of direction, where excellent precision and grip on the surface are required.

The solutions for the WorldSBK and WorldSSP classes

For more information, please refer to the attached sheets. 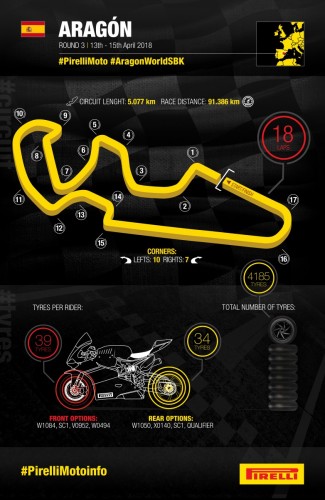 The 2017 Pirelli statistics for Motorland Aragón

• Number of solutions (including dry, intermediate and wet) for the Superbike class: 5 front and 7 rear

• Number of tyres available for each Superbike rider: 40 front and 34 rear

• Number of solutions for the Supersport class (including dry, intermediate and wet): 6 front and 6 rear

• Number of tyres available for each Supersport rider: 20 front and 23 rear