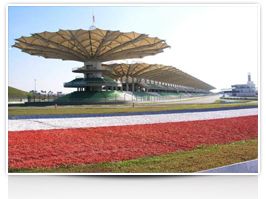 Everything is ready in Malaysia for the sixth round of the MOTUL FIM Superbike World Championship which will take place next weekend at the Sepang International Circuit, the track which will host the production derived series for the third consecutive year. A complete resurfacing project finished a few days ago, together with a drainage system upgrade, corners and escape route restoration in addition to maintenance work of the run-off at turns 1 and 15. World Superbike riders will be the first to inaugurate the new asphalt, which is certainly the most important ‘unknown’ for this round, not only for them and their teams but also for Pirelli. When a circuit is resurfaced it’s usually more abrasive, and therefore is more aggressive towards the tyres but at the same time the new surface is more consistent because it levels off any holes and bumps present for a better ride. The new Sepang asphalt should be very black and bitumen in look, non-slippery even when wet, with a very smooth and regular texture although the grains are larger than those of Misano’s surface. Also the last corner is now fully reworked with a new positive camber for fast cornering. It also means that the new asphalt is darker than the old one: in case of sun and warm weather it will tend to reach even higher temperatures and thereby it loses part of its natural grip. When hot a soft rear solution might be the best option but if the track demonstrates an abrasive surface, a stronger rear compound, such as SC1 and SC2, would be better, obviously this is detriment to grip though. The new asphalt could also be particularly aggressive to the front tyre, that’s why Pirelli will provide even more resistant compounds such as SC2 and SC3. In addition, during the resurfacing works, the camber angles have been modified in some turns, which mean that the camber will be different than in the past. World Superbike riders will have to recreate fresh landmarks for braking markers and explore new lines. The MOTUL FIM World Superbike Championship come back to Malaysia in 2014 after twenty years of absence, choosing the Sepang circuit after using Shah Alam and Johor circuits in the early ‘90s. The Sepang International Circuit was built in the late 90’s thanks to the project made by the renewed architect Hermann Tilke: it’s located about an hour’s drive away from the Malaysian capital of Kuala Lumpur, in the state of Selangor. It’s considered one of the most efficient and technological circuits since its inauguration, and this year has been completely resurfaced using particular bituminous asphalt. This track has a length of 5543 metres: its longest straight measures 920 metres and there is also a second straight as well as fifteen guided corners, five on the left and ten on the right. Between the longest straight and the second longest there is a very slow hairpin that favours overtaking actions. The Malaysian round follows the race weekend at Imola, dominated by the Aruba.it Racing-Ducati rider, Chaz Davies. The Welshman scored a beautiful double win there, the second one of the current season, and was able to consolidate his second place in the general standings with 186 points, behind the current World Champion Jonathan Rea (Kawasaki Racing Team), which has the first position with 221 points.Both Davies and Rea last year scored a victory at the Sepang circuit. The solutions for Superbike and Supersport classes The Malaysian round, as all events outside Europe, is reserved only for both Superbike and Supersport classes. Pirelli will bring to Sepang a total of 3003 tyres overall; 1.703 of them are for Superbike riders and 1.300 are for Supersport ones. Riders of both classes can always count on wet tyres DIABLO™ RAIN and intermediate DIABLO™ WET tyres in case of adverse weather conditions. Regarding dry tyres, in WorldSBK all riders will have three solutions for the front and as many for the rear. In addition to the race rear tyres the qualifier tyre will be as usual available only for those riders who manage to enter the second Superpole session on Saturday. With regards to the options for the front, they are all well-known by the riders. The only development solution is the SC1 S1699, which was widely used and appreciated by riders during the first rounds of this year and which was the most used front option during last season. The range of standard solutions is represented by the SC2, which has a medium hardness compound and is an optimum solution for warm temperatures because it guarantees stability within the tread. The last option is the SC3, which is the hardest solution in the 2016 range and it was by far the most used during the last race in Imola after its debut in Assen. This latter option offers a particular compound which resists well to the abrasive asphalt, so it may prove to be the winning choice. Also for the rear, a development solution and two standard ones will be available. The SC0 T0611 is the development solution which made its debut last year at Imola and it was also used at Portimão, Misano, Laguna Seca, Sepang, Jerez, Magny-Cours and Losail. During the current season it gained good results at Imola. Its very soft compound offers a high grip level with warm temperatures. Alternatively, the riders might use the SC1 standard compound, which is more resistant to abrasion, or even the standard SC2, which is indicated in case of cold temperatures. 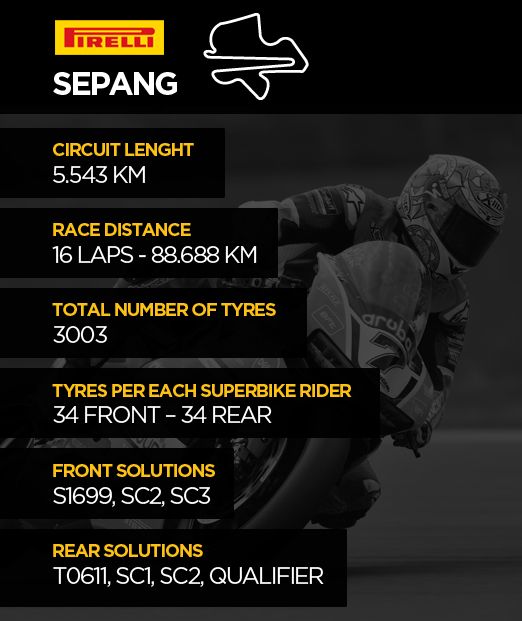 WorldSSP riders will have to choose among three front and two rear solutions. For the front Pirelli provides both the standard SC1 and SC2 which will be joined by the development SC1 U0564, which did its debut last year in Portimão and was used at Misano. The development SC1, compared to the standard one, should be more protected from wear and at the same time it should be more stable than the standard SC2. There are two rear standard solutions. The SC0, which is the perfect one to face smooth asphalt and high temperatures, and the SC1, which offers a medium compound hardness and it’s halfway between the soft and the hard solution. The SC1 should be an excellent alternative to the SC0 if the asphalt proves to be particularly abrasive. The 2015 Pirelli statistics for Sepang • Total number of tyres Pirelli brought: 2925 • Number of solutions (dry, intermediate and wet) for the Superbike class: 5 front and 6 rear • Number of tyres available for each Superbike rider: 35 front and 33 rear • Number of solutions for the Supersport class (dry, intermediate and wet): 4 front and 4 rear • Number of tyres available for each Supersport rider: 23 front and 22 rear • Superbike Best Lap Awards won by: Tom Sykes (Kawasaki Racing Team), 2'03.654 (Race 1, 2nd lap) and Chaz Davies (Aruba.it Racing-Ducati SBK Team), 2'04.707 (Race 2, 3rd lap) • Supersport Best Lap Awards won by: Kenan Sofuoglu (Kawasaki Puccetti Racing), 2'09.338 (5th lap) • Temperature in Race 1: air 31°C, asphalt 43°C • Temperature in Race 2: air 31° C, asphalt 39° C • Maximum race speed reached by Pirelli DIABLO™ Superbike tyres: 310.3 km/h, in Race 2 by Jordi Torres (Aprilia Racing Team - Red Devils) at 2nd lap • Maximum race speed reached by Pirelli DIABLO™ Supecorsa SC tyres in Supersport race: 267.3 km/h, by Kenan Sofuoglu (Kawasaki Puccetti Racing) at 2nd lap and by Fabio Menghi (VFT Racing) at 5th lap.