Pirelli at Silverstone for the first 2011 GP2 test 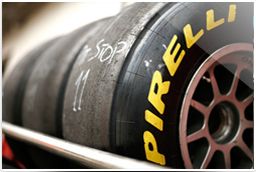 Pirelli will equip this year’s GP2 drivers with its P Zero medium slicks during the first pre-season test this week, running from 4-6 April at Silverstone in the United Kingdom. The next test will take place at Barcelona from 18-20 April, with Pirelli supplying hard compound slicks. Pirelli’s Racing Manager Mario Isola explained: “We decided to bring our medium and hard compound tyres to Silverstone and Barcelona respectively because of the demanding features of these different circuits, which are very challenging for the rubber. First of all, we’re giving drivers our medium slicks at Silverstone because both resistance and versatility are needed there due to the unpredictable weather conditions we may have to face. This makes Silverstone ideal territory for the medium tyre. The hard slicks, by contrast, are an excellent solution for Barcelona where we foresee hotter track conditions. The hard compound is a tyre designed to provide the maximum endurance in the toughest conditions so is best suited to demanding tracks with a fast and technical succession of corners such as Barcelona.” The GP2 drivers have already had their first taste of newly-developed Pirelli tyres in medium compound specification during the 2011 GP2 Asia Series. With only one month left to go before the main GP2 Series starts, the forthcoming tests will be crucial for teaching drivers how to properly manage their new tyres. The 2011 GP2 season will feature nine rounds supporting Formula One grands prix in Europe, starting at the beginning of May in Istanbul and ending in mid-September with the Monza race, in Italy. Throughout the year, Pirelli will supply 14,500 tyres to the GP2 Series, tests included. Four types of dry weather tyre (hard, medium, soft and supersoft compounds) and one type of wet weather tyre will be provided, with four sets of slicks and, if needed, three sets of wets for each car per event. 2011 GP2 pre-season test sessions: 4-6 April    Silverstone, Great Britain (Pirelli P Zero medium compound)     18-20 April    Barcelona, Spain (Pirelli P Zero hard compound) For further information, please contact: Laura Bartoli on laura@mediatica.co.uk  or +44 7500 877 304

Pirelli at Silverstone for the first 2011 GP2 test
Newsroom