Since this is the first time the eni FIM World Superbike Championship will be held at Portimão in the month of June, Pirelli will be bringing various solutions, some of which were already used at Phillip Island and Monza, in SC0 and SC1 compounds which best adapt to operating in the heat 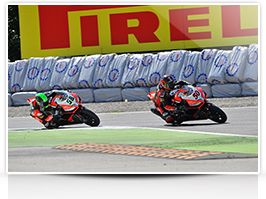 With one third of the eni FIM World Superbike Championships behind us now, Pirelli is ready to get back on the track in Portugal at the Autódromo Internacional do Algarve, where there was a Superbike round just 8 months ago, for the sixth round of the 2013 season. Up to now the 17 inch tyres which have been used from this season in the Superbike class as well have performed very well, confirming the expectations of both the Milan-based company's designers and the riders who have consistently improved their lap times and even broken historic records. Pirelli's development work continues in any case throughout the year, not only to provide the riders with better and better solutions, but also because, staying true to the "We sell what we race, we race what we sell" philosophy, at the end of the season any compound solutions which have proven to be better than the standard ones will be added to the range next year in order to provide bikers with tyres that are always up to date in terms of technology and performance. At Portimão, after the Donington absence, the smaller Superstock classes will be back in action for their fourth round. The Portuguese track which will be the setting for the 4 eni FIM World Superbike Championship classes was designed by architect Ricardo Pina and is 4592 metres long with turn radii that go from a minimum of 23 metres to a maximum of 207 metres. The straight line to the finish is 835 metres long and the rider in pole position starts from the right side of the track. Portimão from a tyre point of view: 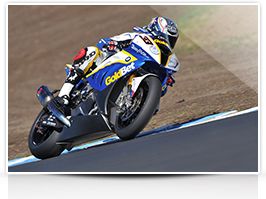 Since being opened in 2008, the asphalt on the Portuguese circuit has gradually lost its aggressive character, greatly smoothing out its harshness on the tyres and losing some of its natural grip. When it hosted the first official competition on 2 November 2008 with the final round of that season's World Superbike Championship, ending with the farewell to multiple world champion Troy Bayliss, tyres with extremely high mechanical resistance had to be used in order to prevent tearing of the tread surface and to minimise removal of the compound due to friction. The situation last year was quite different when even the softest solutions suffered in terms of grip with the asphalt temperature above 40°C. This year, since the races will be held in June, the temperatures may very well be even higher and this effect could be even greater. Generally the Autódromo Internacional do Algarve is one of the circuits that best bring out the capacity of the tyre to operate in extremely different conditions. The part of the track that puts the tyres to the hardest test is the last turn which is 350 metres long and takes 6.5 seconds to navigate: due to the large turn radius (about 150 metres), the bike is in constant acceleration and goes from 150 to 250 kph at a lean angle of about 50°. This causes a significant increase in temperature on the side of the tyre affected by the lean, particularly for the rear tyre which must withstand the high heat while simultaneously ensuring strong lateral force and allowing the bike to accelerate. Therefore, with high running times and fixed lean angles (especially in the event of low grip) high spinning is generated as well as significant peaks in localised temperature at 45-50°C on the tyre shoulder. The weakening of the compound due to heat, even with smoother asphalt, causes significant levels of material removal. For this reason a significant amount of tyre wear can often by noted at the end of the races. The riders who are able to come out of this turn and onto the straight stretch at the highest speed will be able to gain a significant advantage over their rivals. On the contrary, turns 5, 8, 11, 13 and 14 have a very tight radius (about 30 metres), which forces the rider to brake to an extremely low speed. Halfway through the turn the bike needs the rear tyre, which is very cold, to provide strong longitudinal acceleration up to 1G at a lean angle of 50°. The tyres are particularly cold, especially coming into the left handers (numbers 5 and 13). Once again, the riders who are able to accelerate a bit earlier than the others will have an important advantage. 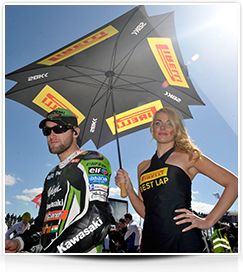