The Spanish round marks the season debut for the Superstock classes and European Junior Cup. Superstock 1000 sees a move to the softer SC1 rear DIABLO™ Supercorsa tyre from the SC2 compound

The day after the races, the circuit will host the second round of the Pirelli SBK® Track Days initiative, with track sessions organized by the tyre company for riders who love the brand of the elongated P logo

Pirelli is back on stage in Spain this weekend for the first European round of the eni FIM Superbike World Championship which will take place this year at Motorland Aragón from 10 to 12 of April. The Iberian circuit will host not only races but also, on the Monday following the weekend's races, the second event of the Pirelli SBK® Track Days initiative, after the first which took place in Thailand on the new circuit of Buriram. The Pirelli SBK® Track Days are days of track sessions organized by the tyre company on some of the best circuits of the World Superbike calendar and which are dedicated to all bikers who love the Pirelli brand. 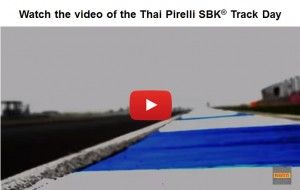 Being the first European round, Motorland Aragón will see the season debut of the Superstock 1000 FIM Cup and Superstock 600 UEM European Championship, as well as the European Junior Cup. Unlike past years, the news this year is that in Superstock 1000, in agreement with Dorna, teams and riders, Pirelli has decided to change the rear tyre from the DIABLO™ Supercorsa SC2 compound to the softer and higher performing SC1 that will surely help to make the races of this class even more exciting. DIABLO™ Supercorsa tyres are used in all classes except Superbike where slick DIABLO™ Superbike tyres are used. In the Supersport class 120/70-17 front and 180/60-17 rear with different compound solutions to which Pirelli can add development solutions over the year. In Superstock 1000 120/70-17 front in the confirmed SC2 compound while the 200/55-17 rear this year will be the SC1 compound. For the Superstock 600 class as in the past the tyres will be available to riders in 120/70-17 SC1 front compound and 180/60-17 in SC2 rear compound. Finally, the European Junior Cup which this year will race with Honda CBR500R shod with DIABLO™ Supercorsa SC1 front and SC2 rear. MotorLand Aragón VS tyres: abrasive asphalt and possibility of low temperatures La Ciudad del Motor de Aragón, better known as Motorland Aragón, is a race track located in Alcaniz, within the Spanish autonomous community of Aragón. The circuit is 5344 metres long but in the configuration used by the Superbike World Championship has a length of 5077 metres. The track was designed by the well-known German architect Hermann Tilke and opened in 2009, from 2011 it has hosted the World Superbike Championship. This circuit is characterized by the high level of abrasiveness of the asphalt effecting  the rear tyres. The surface has a very marked roughness which is joined by cooler temperatures, typical of April. Moreover, the possible presence of residual sand carried by the wind accentuates this abrasiveness. The sand that is deposited on the road surface prevents the optimal contact between the tyre tread and asphalt and so cause loss of grip and making it diffuclt to hold a line. It is therefore not uncommon to see heavy wear and cold tearing on the rear tyres during the first sessions of the weekend and during warm-up. The rear solutions chosen by Pirelli for this track are designed to find the right balance between stability and rigidity of the compounds and the grip they can utilise when warm. The choice of the front tyres, the aggressiveness of the asphalt which has only a partial impact on their wear, must take into account two key aspects. The first is the heavy braking section on the straight opposite the pit lane that cause high stresses on the front. Both require a large amount of support from the front in order to prevent vibration and movement going into the turns. The second aspect to be considered is, on the other hand, the fast corners and multiple changes of direction, where excellent precision and grip on the surface are required. To reduce times, you need good front end grip, which is why two soft SC1 solutions which provide better traction were brought.

Pirelli’s solutions for Superbike and Supersport classes: The company will bring Aragón a total of 4644 tyres to cover the needs of the four classes that are part of the eni FIM Superbike World Championship and European Junior Cup. The minor categories of the Superstock 1000 FIM Cup and Superstock 600 UEM European Championship will have, as throughout the championship, DIABLO™ Supercorsa tyres only in standard solutions. Specifically in the 600 class riders are using the SC1 front and the SC2 rear compounds, while the riders of the 1000 class will use the SC2 front compound and for the first time the SC1 at the rear. Each Superbike rider will have 34 front and 37 rear tyres, for Supersport the amount will be 22 front and 25 rear. For Superbike Pirelli proposes three dry solutions for the front and 3 for the rear in addition as always to the rear qualifier tyre that riders can use in the two sessions of Superpole on Saturday and to the intermediate solutions, available in the amount of 3 for the front and the same for the rear, and in rain solutions, quantities of 8 front and 8 rears. At this track there will also be a new development rear tyre for wet, the T1161 solution, which should offer greater stability in a straight line and while braking. At the front, choices of slicks are the standard SC1 and SC2, in addition to which there is a development SC1, the S1699, which debuted successfully at Aragón in 2014. This offers more support in the approach to the corner in favour of better steering precision. The latter was the most popular solution for the front in 2014 and this year has also been taken to Australia and Thailand. At the rear three solutions are provided, the standard SC0 and SC1 will be complemented by a new development solution, the T1392, which differs from the standard SC1 a different construction that guarantees a more homogeneous and constant behaviour for the entire duration of the race. In WSS there is available to the riders for the front end, two solutions in medium-soft compound, the standard SC1 and the development SC1 S1485, which made its debut in Misano in 2014, which was also taken to Portimão and Magny-Cours. Usually it provides greater support in the approach to the curves in favour of better steering precision and this year has been brought only to Australia. At the rear, riders can choose between the standard SC0 and SC1 or opt for the new soft solution T0957, which differs from the standard SC0 for with a different construction again guaranteeing a more homogeneous and constant behaviour throughout the entire duration of the race. 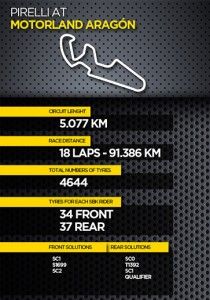