Pirelli back to defend title on home territory

Andreucci, who has won the Italian title five times - four of which have been with Pirelli - returns to defend the championship he claimed last year with Peugeot Italia and Pirelli, at the wheel of the 207 Super 2000. 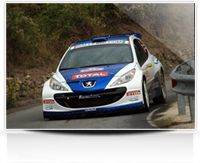 As usual, he will be co-driven by Anna Andreussi, but the Italian crew know that they face an even tougher challenge this year. "The competition is getting stronger all the time, and there are new cars coming into the series as well," said the 45-year-old Andreucci. "We've got lots of experience of though: particularly of the Rally del Ciocco as it's my home event. I'm delighted that we've got Pirelli on our side again: the development work that has been done on the tyres throughout the past year or so is really impressive and I'm confident that we've got a very strong range of tyres heading into the new season." The Rally del Ciocco is held on narrow and slippery asphalt roads in central Italy near Lucca, where the weather at this time of year is frequently inclement. Rain is a common occurrence, which makes the braking zones especially tricky to negotiate. "It's a very tough event for the tyres, as the surface conditions keep on changing, " added Andreucci, a four-time Ciocco winner. "In some respects it's like a mini Monte Carlo Rally, as you often climb from the bottom of the valley to altitudes of more than 1200 metres and the grip is never the same. The tyre choice has to be exactly right." Other top drivers competing on the Rally del Ciocco with Pirelli include Alessandro Perico, a former winner of the legendary Sanremo Rally, at the wheel of another Peugeot 207 S2000. As well as counting for the Italian Rally Championship, the Rally del Ciocco is also the opening round of the Trofeo Renault Italia – which is exclusively supplied by Pirelli this year and features 15 entries at the wheel of the highly competitive Clio R3. Pirelli is also supplying the top Group N runners on the event. The Italian firm will equip all its competitors with the well-proven RX7 tyres for the Rally del Ciocco, which are designed to be particularly effective on slippery asphalt. For damp conditions, the softer RX9 tyre will be used, with a compound better suited to lower temperatures. If it rains, the soft-compound RE7 is available, with its unique tread pattern intended to disperse water and prevent aquaplaning without compromising roadholding. Paul Hembery, Pirelli's Motorsport Director, commented: "The Italian Rally Championship has always been very valuable to us and we're determined to defend our title on home soil. A lot of development work has been carried out on our asphalt tyres recently, but the Rally del Ciocco is one of the events where they will be tested most this year: in the past we've even seen some snow there. Conditions should be milder this time, but I'm sure the competition is going to be just as tough." The Rallye del Ciocco gets underway on Friday with the first of 13 stages that make up a competitive distance of 151.91 kilometres in total. The rally is scheduled to finish at 17:30 on Saturday. This will be one of the busiest weekends in the Italian company's motorsport history, with Pirelli supplying Formula One in Australia as well as the WRC Academy in Portugal, at the same time as the Rally del Ciocco.

Pirelli back to defend title on home territory
Newsroom