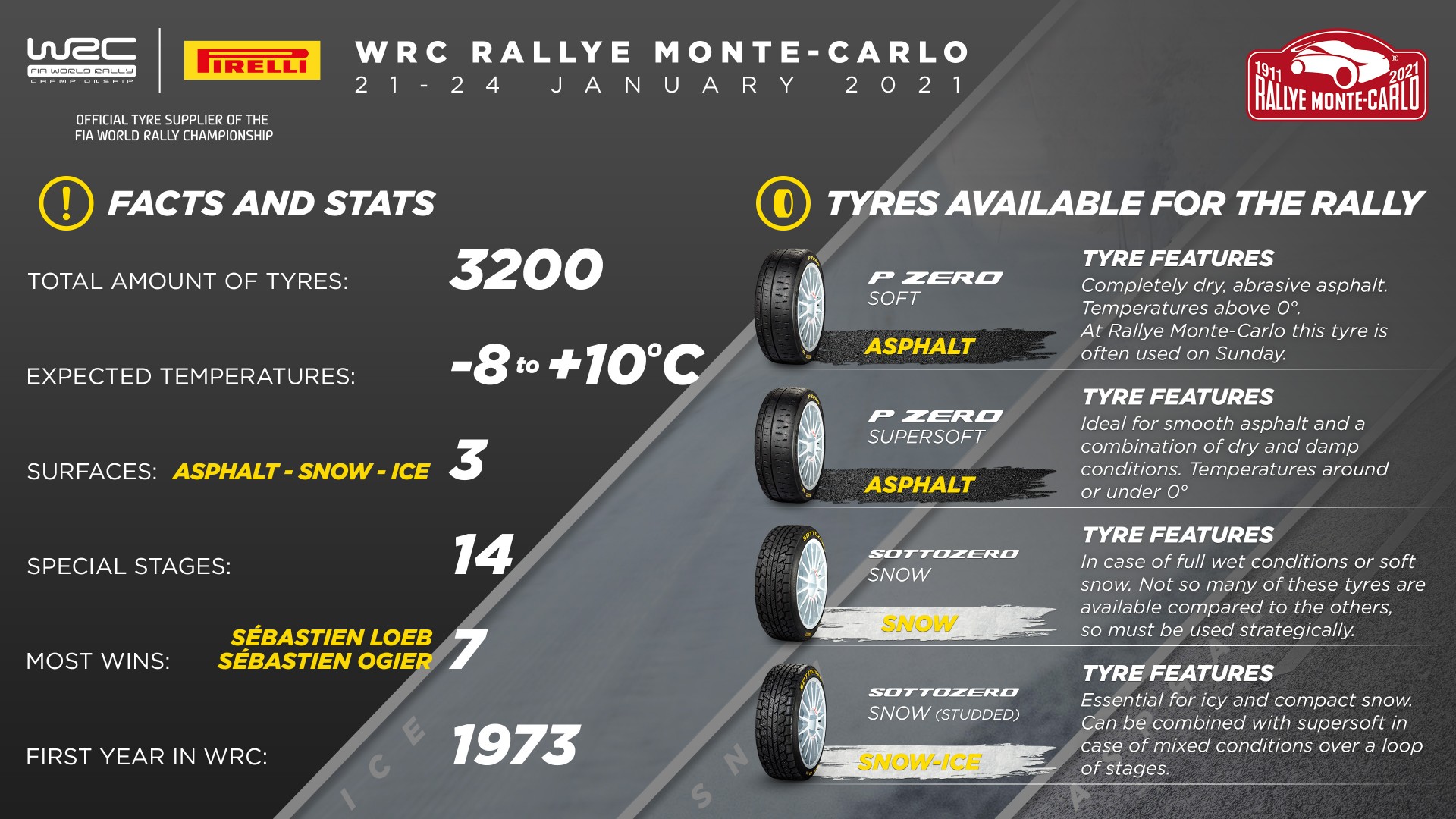 Milan, January 18, 2021 – As the opening round of the 2021 season, Rallye Monte-Carlo will mark Pirelli’s FIA World Rally Championship return as exclusive supplier to the top class for the first time since 2010. Celebrating its 110th anniversary this year, the event is one of the most demanding anywhere in the world because of the often changeable weather conditions encountered on the asphalt roads of the French Alps.

The Pirelli tyres in Monte-Carlo

P Zero RA: Pirelli’s asphalt product – designed for dry or damp roads – is supplied in a supersoft compound exclusively for Rallye Monte-Carlo and its cooler temperatures. Also available is a soft compound, which will be seen on asphalt events throughout the season.

Sottozero STZ-B: A winter tyre designed with the mixed conditions of Rallye Monte-Carlo in mind that comes in two specifications: with or without studs.

Terenzio Testoni, rally activity manager: “We’re delighted to be coming back with some brand new tyre concepts: all our previous rallying successes and know-how have gone into the development of this latest generation of tyres. Monte-Carlo is the most challenging rally of the year for tyres, where crews have to think about making the best choice for whole loops rather than individual stages. This year, the job becomes even harder due to Covid-related restrictions, which might mean we see one of the most unpredictable Montes ever.”

Pirelli will bring around 3200 tyres to Rallye Monte-Carlo. Of these, 800 are for the top class of World Rally Cars.

Each of the 10 WRC drivers have an allocation of 80 tyres, from which they can use up to 34 during the rally:

Pirelli is set to supply 35 other four-wheel drive cars, including those in the WRC 2 and WRC 3 championships which are also exclusively supplied by the Italian company this season.

Pirelli will have 27 staff present on the rally including fitters and engineers.

The big number: 258. The schedule revisions make this the shortest Rallye Monte-Carlo ever at just under 258 kilometres. It promises to be no less intense, however.

With sections of dry asphalt, ice and snow often all present in a single stage, it’s impossible to be on the right tyre all of the time. That makes it very tricky for drivers to know the correct rubber to leave service with – even though they have the help of route-note crews and dedicated meteorologists within each team, as well as Pirelli’s experienced engineers.

Early starts. A nightly curfew in France as part of the country’s Covid-19 restrictions means the rally schedule has been shifted forward by a few hours each day. As a consequence there are no late-night stages this year, but there will instead be stages run before dawn on both Friday and Saturday. Temperatures can vary rapidly at this hour, making tyre choices even harder. A key stage will be La Bréole – Selonnet, run at 06:30 on Saturday morning, then again at midday before the crews venture south for Monaco. It climbs early on to the highest point of the rally, at 1325 metres above sea level.

Juha Kankkunen: “There’s no such a thing as the perfect tyre for Monte. Only the least worst compromise.”

Pirelli in the past

In the 1980s, Lancia found a novel solution to the headache of tyre choice on the Monte. On the 1983 event, it made Formula 1-style pit-stops in the middle of a stage, swapping soft rear asphalt tyres for studded ones, especially developed for the two-wheel drive 037 by Pirelli.