Pirelli brings its GP2 and GP3 soft tyres to Nurburgring 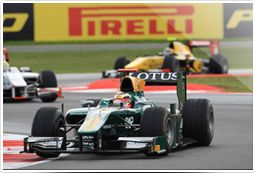 Pirelli’s GP2 and GP3 soft compound tyres head towards Germany where they will equip Formula One’s feeder series at the Nürburgring circuit next weekend, running alongside the German Grand Prix. Pirelli’s Racing Manager Mario Isola explains: “At Nürbrurgring we will bring our GP2 and GP3 soft tyres which are the best option to combine grip and performance on this technical track which is characterised by medium speed levels and a good mix of slow and fast corners. The main challenge will be the weather which is quite unpredictable just like at Silverstone. The tyre choice for this round aims to provide drivers with a consistent tyre which gives good grip and road-holding. As the surface is not too abrasive, tyre wear will not be an issue, though the drivers will have to manage their tyres properly if they want to enjoy some great overtaking and racing.” Built next to the legendary Nordschleife, the modern Nürburgring circuit is a demanding track where the cars tend to run with relatively high downforce to achieve the best grip. Completed in 1984, the new Grand prix track was built to meet the highest safety standards at the expense of overtaking opportunities which are quite limited. In fact, it is notoriously difficult to overtake at the Nürburgring, with success requiring the maximum commitment. “Having tyres with variable durability, GP2 and GP3 drivers will have to fine tune their strategy and take good care of their rubber during racing. In Germany, tyre management will play a key role as the soft compound tyres are designed to be less durable and will gradually start dropping off after a few laps. Because of the high aerodynamic loads and hard breaking areas, GP2 and GP3 drivers will have to drive smoothly and try not to be too aggressive on their tyres, avoiding to stress them excessively especially in the several heavy braking areas where good balance and stability are required,” adds Mario Isola. German GP2 driver Chirstian Vietoris (Racing Engineering) commented: “After a very positive weekend at Silverstone, I am looking forward to racing on home ground in Germany. The team and I are doing a lot of preparation to be fully ready for the next round. Specifically we are working to fine tune the set-up of the car. In Valencia, I struggled a bit to keep degradation under control running on the soft rubber.” Italian GP3 driver Vittorio Ghirelli (Jenzer Motorsport) commented: “Nürburgring will be quite a challenge but the team and I are making lots of progress and the feeling with the car and the tyres is getting better and better. To be honest, I feel more comfortable running on Pirelli’s harder rather than softer compounds but I’ll get there. In a way, it’s good to have tyres with deliberate degradation: last year it was a bit boring while this year it’s much more fun.” On Friday 22 July, the GP3 drivers will take part in two practice sessions while the GP2 drivers will complete a single practice and qualifying session. On Saturday 23 July, GP3 drivers will complete their qualifying session in the morning, followed by the GP2 feature race at 15:40 and the first GP3 race at 17:20 local time. Before the German Formula One Grand Prix gets underway on Sunday 24 July, the second GP3 race will take place at 9:20, followed by the GP2 sprint race at 10:30. The GP2 drivers will cover 35 laps in Saturday’s race and 24 laps in Sunday’s race, while both GP3 races will last for 15 laps of the 5.148 km-long German track. For further information please contact: Laura Bartoli on +44 7500 877304 or  laura@mediatica.co.uk

Pirelli brings its GP2 and GP3 soft tyres to Nurburgring