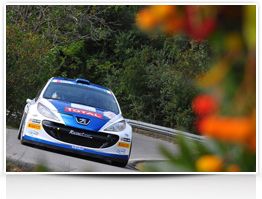 Pirelli has claimed its fifth consecutive Italian Rally Championship title together with Peugeot Italia on the final round of the series in Sanremo. The Sanremo Rally was also the penultimate round of the FIA European Rally Championship, attracting some of the best crews from all over Europe. This latest success marks the latest chapter of the success story that has linked Peugeot, Pirelli and Paolo Andreucci since 2009. Making Peugeot Italia’s triumph even more remarkable this year is the fact that Andreucci has contested most of the year with the 208 R2: considerably less powerful than the Super 2000 cars that headline the championship. As a result, Skoda Italia driver Umberto Scandola – also equipped by Pirelli – already clinched the drivers’ title on the previous round in Friuli. Now Peugeot adds to another clean sweep for Pirelli by clinching the manufacturers’ championship for the fifth time. Pirelli also wins the Junior title with Andrea Crugnola, in a Renault Twingo R2, while Alessandro Perico used Pirelli tyres to finish on the podium overall in his private Peugeot 207 S2000. Andreucci was set to win the rally, having led from the first day, but a mistake on the seventh stage dropped him out of contention. “It was my fault: I just got caught out by a slippery place on a really banal stretch of road and we lost eight minutes,” he said. “But we were able to carry on and have fun – and the most important thing is that my mistake today should not take anything away from what has been a fantastic effort by the whole team and Pirelli all year, which has resulted in yet another title for Peugeot Italia. It’s been a fantastic result as we’ve had to push so hard to achieve this, especially when we were driving the R2 car.” Pirelli brought the RX5c tyre with a longitudinal cut required by the new FIA regulations. This tyre worked equally well in a wide variety of conditions: the cold temperatures of the opening leg (below five degrees) and the warmer temperatures of Saturday that peaked at 25 degrees centigrade. Pirelli’s product manager Terenzio Testoni concluded: “Once more we’ve proved that our tyres are extremely competitive against the strongest competition that Europe has to offer. Paolo had an advantage of nearly half a minute at the head of the field this afternoon and the one small mistake he made does not detract in any way from what has been a brilliant season for him, Peugeot and Pirelli on the Italian championship. We’ve been pleased with the performance of the tyres all weekend, which is why we were disappointed that the scheduled 55-kilometre stage on Friday night was split into two stages in the end. That was certainly not at our request and we would have liked to see it run, but if there are spectator safety issues involved then we have to respect the decision. During this loop, the Pirelli-equipped cars used just four tyres: enough for all 55 kilometres. It’s a shame that Umberto Scandola was not able to make the finish after a great championship season and a strong opening leg. In any case, congratulations to Umberto for already clinching the drivers’ title this year, and now we are delighted to add another manufacturers’ title for Peugeot to Pirelli’s list of achievements.” Ends For more information about Pirelli, please contact Anthony Peacock on +44 (0)7765 896 930 or anthony@mediaticaworld.com