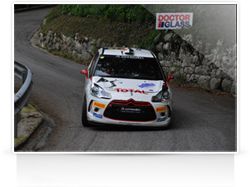 Campedelli, who has also starred on the World Rally Championship in the past, clinched the title thanks to another class victory on the 47th Rally del Friuli: the penultimate round of the Italian Rally Championship. The 25-year old Campedelli, co-driven by experienced navigator Danilo Fappani, is also on course to claim the Italian Junior Championship with Pirelli on the final round later this month, the Rally San Martino di Castrozza high up in the Dolomite mountains. Campedelli clinched this year’s two-wheel drive title thanks to three victories on his Pirelli tyres, in Salento, Gubbio and Udine, despite missing the Rally del Ciocco at the beginning of the year. The P Zero rubber he used proved to be faultless throughout the season, displaying a similar reliability record to that demonstrated by Pirelli when it equipped the World Rally Championship between 2008 and 2010, with a failure rate of less than 0.02% on both gravel and asphalt. The two-wheel drive class is one of the toughest tests for any rally tyre, as the front tyres have to put all the car’s power down onto the road as well as brake and steer: pushing the capabilities of the tyre to the utmost. As is always the case in rallying, Campedelli’s tyres were subjected to a wide range of conditions and temperatures from summer to winter, demonstrating their superiority on all surfaces no matter how challenging the conditions became. The lessons learned in competition ultimately benefit all the everyday motorists who choose Pirelli tyres for the road, thanks to the close link between motorsport and road tyres that is at the heart of Pirelli’s production philosophy. Campedelli commented: “This title is a great honour for all of us. Once again we had the best equipment possible at our disposal; the car did not have any problems at all throughout the rally and the Pirelli tyres allowed us to hold onto the lead without going over the limit.” Pirelli already clinched the overall drivers’ title on the Italian Championship with two rounds to go thanks to the Peugeot of Paolo Andreucci. This year marks the fifth drivers’ title that Andreucci and Pirelli have claimed together. Pirelli’s motorsport director Paul Hembery commented: “Many congratulations to Simone and Danilo for clinching the two-wheel drive championship with Citroen, giving Pirelli a clean sweep of Italian rally titles so far this year. Despite missing one of the rounds, he overcame drivers with plenty more experience to demonstrate the capabilities of our tyres once more in a huge variety of extreme conditions. With one round of the Italian Rally Championship still left to go, we’re definitely looking to end the year on a high.” The final round of the series, the Rally San Martino di Castrozza, takes place from the 15-17 September, where Campedelli will be battling to add the Italian Junior title to his collection of trophies. For further information on Pirelli in rallying please contact: Anthony Peacock on +44 7765 896930 or anthony@mediatica.co.uk