One chapter closes and a new one opens for Pirelli: the inaugural GP3 season came to an end this weekend in Monza, the heartland of motor racing in Italy, and the famed Italian tyre manufacturer now looks forward to supplying Formula One, GP2 and GP3 at the pinnacle of single-seater racing from next year. The new eight-round GP3 Series - which took place exclusively at Formula One race meetings this year - was designed as a stepping-stone to GP2, which in turn has proved to be the established route to Formula One, with 11 drivers graduating in recent seasons. 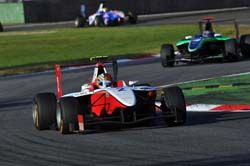 The qualifying session at Monza, with its two supplementary points, crowned the first GP3 Series champion: Mexico's Esteban Gutierrez, driving for the ART team from France - which also clinched the teams' title, running on Pirelli's 13-inch PZero tyres. Pirelli used three varieties of tyre over the course of the season: soft, medium and hard compounds, as well as a wet tyre that also saw plenty of use during the second half of the year. The tyres all proved to be durable yet consistent, although part of the brief from the GP3 Series organisers was to build in a degree of artificial degradation, in order to teach the 30 young drivers the art of looking after their tyres in a race situation. With identical 280-horsepower Renault-engined cars and control tyres, the emphasis in GP3 is firmly on driving talent: true to Pirelli's motorsport philosophy of nurturing the stars of the future. Pirelli brought medium compound PZero tyres to Monza, which were also used at the last round of the series in Belgium. Monza is Pirelli's home race, located just half an hour from the company's headquarters, and the circuit contains a number of unique challenges for tyres thanks to its rapid straights and raised kerbing on the chicanes. The circuit is a legend in motorsport history thanks to its famous corners such as the Parabolica and also the surviving sections of the atmospheric Monza banking, which was last used for the 1000km sportscar race back in 1969. Gutierrez dominated the weekend, setting fastest time in practice and qualifying to clinch the title before crowning his achievement with a hard-fought win in race one on Saturday afternoon. Sunday morning's second race was claimed by Robert Wickens, in a sensational drive from fifth on the grid. Pirelli's racing manager Mario Isola commented: "We've enjoyed an exciting end to what has been a fascinating inaugural season of the new GP3 Series, in which Pirelli was proud to play a key role as we returned to circuit racing for the first time in 20 years: the first step of an engagement that we will maximise next year. Our medium-compound rubber performed very well at Monza, which is an extremely demanding circuit for the tyre construction because of both high speeds and the aggressive kerbing. Esteban is a truly deserving champion who has made his mark on the series from the very start of the year; we wish him yet more success on our tyres for the future and we already look forward to supplying GP3 again with some new products next year." While the GP3 season is now over, Pirelli has a hectic schedule planned for the coming months as it test the new generation of Formula One and GP2 tyres that will be used exclusively at Grand Prix weekends next year.