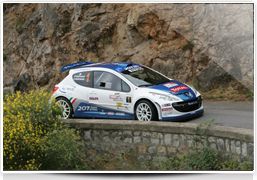 Pirelli has continued to be a dominant force on the Italian Rally Championship, with the crew of Paolo Andreucci and Anna Andreussi making it four wins out of four rallies, thanks to another victory on the Targa Florio Rally last weekend in their Peugeot Italia 207 S2000. The Targa Florio is one of the most famous names in motorsport, and it is now one of the highlights of the Italian Rally Championship thanks to a series of short but challenging mountain stages on asphalt in Sicily. It was the sixth win on the Sicilian event for Andreucci, who is also Pirelli’s official test driver. As is the case with all the rallies on the Italian Championship, the surfaces were extremely challenging, but the PZero tyres gave Andreucci all the control he needed to make his mark on the event by winning three of the 12 stages: a total of 255 competitive kilometres. Throughout the first full day he was engaged in a gripping duel against Abarth driver Luca Rossetti, but Andreucci was able to get the most out of his car and tyres on the final day following Rossetti’s retirement to win by nearly 40 seconds. Andreucci has now become the most successful driver in the history of the Targa Florio, surpassing the record previously held by Franco Cunico, who has five Targa Florio victories. Andreucci used Pirelli’s PZero RX tyres for the 95th Targa Florio Rally, which are specifically designed to provide maximum grip on dry asphalt. Similar technology is used on Pirelli’s PZero road car tyres, meaning that ordinary road users constantly benefit from the lessons learned in competition. The Italian driver commented: “I’d like to give a special thanks to Pirelli, whose tyres were extremely competitive on this event, and to the team, who did a magnificent job. I always thought that it was going to be a very close fight here so because of this we worked very hard to find the best set-up and make the right tyre choices with Pirelli. I’m delighted with the result, not only for the championship, but also because it means a lot to me to enter the history books on this event, where we enjoy so much support from everybody.” Local driver Marco Runfola drove brilliantly on his Pirelli tyres to finish a well-deserved third in his Peugeot 207 S2000 to make it two Pirelli cars on the final podium. Pirelli-equipped drivers Alessandro Perico and Toto Riolo (who won the event last year) finished sixth and seventh respectively in similar Peugeot 207s. Sicilian driver Andrea Nucita was first two-wheel drive car as well as first in the Italian Renault Clio Trophy, which supplied by Pirelli, and ninth overall. Simone Campedelli was 11th overall in his Citroen DS3 R3T on Pirelli tyres, with Andrea Crugnola 13th in a similar car – making it a podium monopoly for Pirelli in the two-wheel drive category. Pirelli’s motorsport director Paul Hembery commented: “Congratulations to Paolo, Anna, Peugeot Italia and all the other Pirelli runners on the Targa Florio: we’re very proud to have won again on one of Italy’s most famous events. Even though we’re in Formula One now we’re still extremely strong supporters of rallying. The performance of our tyres on the extremely demanding stages of the Italian Championship have been exemplary, both on asphalt and gravel, and we are fully committed to delivering yet another Italian title.” The next round of the Italian Rally Championship is the Rally del Salento from June 16-18. For more information about Pirelli, please contact Anthony Peacock on +44 (0)7765 896 930 or anthony@mediatica.co.uk