Pirelli will continue its comeback to international open-wheel racing when the GP3 Series resumes with the third and fourth races of the season at Istanbul Park in Turkey this week (28-30 May). Nearly 20 years after Pirelli concluded its engagement at the highest level of world motorsport, at the end of the of the 1991 Formula One season, the Italian tyre company has been appointed as the official tyre supplier to the one-make single-seater series, which has been pitched as a stepping-stone to GP2, a direct feeder category to Formula One. 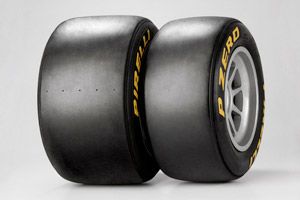 Pirelli got its agreement to supply the inaugural GP3 series with control tyres underway in the opening two rounds at the Circuit de Catalunya, the home of the Spanish Grand Prix, earlier this month where a full grid of 30 GP3 cars lined up for the inaugural races. They were all using Pirelli's newly developed PZero 13 inch control tyres. As in Barcelona, Pirelli has nominated the medium compound tyre for the races at Istanbul Park, which is located to the east of Turkey's largest city. Part of Pirelli's brief from the GP3 series organisers was to incorporate some artificial degradation within the tyres, in order to teach the young drivers how to look after their rubber by driving smoothly: a skill that will be vital for their future careers, as Pirelli's Racing Manager Mario Isola explains. "We considered the hard compound tyre for Istanbul but, after considering the degradation issue with the organisers, we decided to go with the medium compound tyre," said Isola. "After checking the tyre following the races in Barcelona, we saw the tyre wear had been very good and very consistent but perhaps too consistent for what we are trying to achieve." Although the Barcelona race weekend took place in mixed and somewhat cool conditions, Isola expects dry and hot temperatures in Istanbul. "The weather in Barcelona was strange, compared to what we expected, with some rain for the practice," said Isola. "In Turkey we will have higher temperatures for sure and we will have to pay attention to that. That will be a new experience but it will be good for collecting the data we need because we will consider making adjustments to the specification of the tyres if it's necessary. "For example, in Barcelona, we found there to be some differences with the tyre caused by running on a track with lots of rubber, which is something we were not able to simulate during our testing because we only had one car on the track. But we're delighted with the way that this new adventure has started for us and it's a fantastic sight to see Pirelli's yellow trucks back in a Grand Prix paddock after so many years and we're really looking forward to the rest of the season now." After the opening two races of the season, Canadian Robert Wickens heads the standings from Norwegian Pal Varhaug, winner of the inaugural GP3 race, and the Mexican Esteban Gutierrez in third. American Alexander Rossi, winner of the second race in Spain, is currently fourth in the table. In Turkey, the GP3 Series drivers will take part in a single practice and qualifying session at 17:00 on Friday and 09:45 on Saturday respectively. The two 15-lap races are on Saturday at 17:20 and Sunday at 10:25. Istanbul Park measures 5.338-kilometres in length. All GP3 Series drivers use identical Dallara-built chassis powered by a 280bhp turbocharged Renault-developed engine.