Despite atypical temperatures for the month of June which never took the asphalt
to more than 27 degrees, the two SC0 compound solutions Pirelli brought were
chosen for the rear by all the Superbike riders, contributing to exciting races which
came down to the last turn 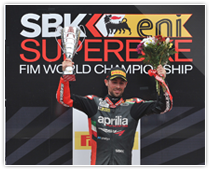 The popularity continues among Superbike and Supersport class riders in the eni FIM World Superbike Championship for the 17 inch Diablo Superbike tyres in SC0 compound, the softest of the range. In particular, Pirelli brought not one, but two SC0 compound soft solutions to Portimão for both Superbike and Supersport, both quite popular among the riders and stars of the race weekend. In Superbike the standard SC0 solutions already used by all the riders at Donington and (in a version with reinforced central section) at Monza, was joined by a new specification (the S502) which was designed by Pirelli for the purpose of providing greater stability, in particular at high and demanding track temperatures like those at the Autódromo Internacional do Algarve. This explains why it was precisely this solution that was most used throughout the weekend. In Supersport as well, in addition to the standard SC1, the riders had two SC0 soft compound development solutions which proved to be the ones chosen by all the riders on the grid. 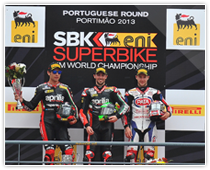 Thanks in part to the tyres, today's races were extremely heated and exciting: in Race 1 Marco Melandri (BMW Motorrad GoldBet SBK) who started from the fourth position on the grid, after a series of impressive passes, took the top stop of the podium in front of Sylvain Guintoli (Aprilia Racing Team) and Tom Sykes (Kawasaki Racing Team), respectively second and third across the finish line. In Race 2 Eugene Laverty (Aprilia Racing Team), who was forced to withdraw from the first race due to engine problems, spared no energy and, starting from the second spot on the grid, dominated for the entire race, taking first place in front of Aprilia's French rider, Sylvain Guintoli and Jonathan Rea (Pata Honda World Superbike). It was hard luck for Tom Sykes who, after a crash during the entry lap, had to return to the garage in order to repair his bike and was then forced start from pit lane, as he was unable to line up in his spot on the grid within the regulation time. Despite this, the Englishman took some small satisfaction by setting a new fastest lap record for the track at 1’42.475, breaking the one set by Max Biaggi in 2010 (1’42.774) and winning the Pirelli Best Lap Award for Race 2. 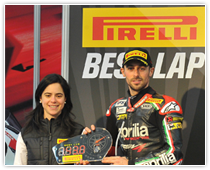 The overall rider standings are still led by the Aprilia Racing Team Frenchman, Sylvain Guintoli who now has a 28 point advantage over Tom Sykes (Kawasaki Racing Team) and 39 over his team mate, Eugene Laverty. Fourth position is occupied by Marco Melandri with a gap of 57 points, unlucky in Race 2 due to abnormal wear of the rear tyre, the causes of which are being investigated by the team and their suppliers, including Pirelli. The Pirelli solutions chosen by the riders: As occurred already in the last two rounds at Monza and Donington, once again at Portimão all the Superbike riders on the grid opted for the soft solutions on the rear in both races, which in this case were: the standard SC0 (R1261) which was used in the last two rounds and a development SC0, the S502, brought here for the first time and never before tested by the riders. Precisely the latter option proved to be the one chosen by two thirds (12) of the riders on the grid in both Race 1 and Race 2, whereas all the others opted for the standard SC0 solution. The only exception was Michel Fabrizio who changed the rear tyre in Race 2, mounting a development SC1 solution (R1255). On the other hand, the most used solution on the front was the standard SC2 (R982), chosen by14 riders in Race 1 and by 11 in Race 2. The rest of the riders opted instead for the standard SC1 (R426). 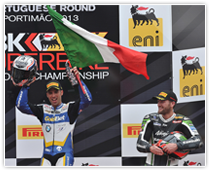 In the Supersport class the SC0 S510, already used at Monza, was the most used solution on the rear, but the star for the front was the Diablo Supercorsa standard SC1 (P1177), chosen by most of the riders. The remainder, on the other hand, opted for the new S753, a development solution that falls midway between the SC1 and SC2 in terms of hardness, providing more stability and rigidity than the SC1 but also more grip than the SC2. Pirelli Best Lap Award: The Pirelli Best Lap Awards are assigned to the riders who put in the fastest lap in the Superbike and Supersport races. The awards were presented by Racing Director Giorgio Barbier and by Marta Gimenez, Marketing Manager for Spain and Portugal, in the Paddock Show during the press conference that follows the podium ceremony at the end of Superbike race 1 and race 2 and the Supersport race. 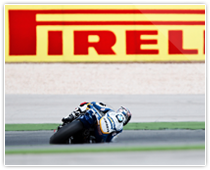 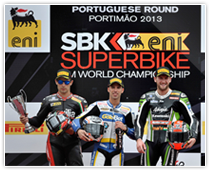 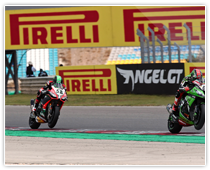 Comment from Giorgio Barbier, Pirelli Moto Racing Director: “First of all I would like to extend my compliments to all the riders who made it to the podium because they really made the races exciting, demonstrating their talent and just how high the competition is in all the classes. Racing in a setting like the Autodromo do Algarve with its up and downhill sections and blind turns is without a doubt is an advantage in and of itself in terms of being a spectacular show, but the riders and tyres did the rest. Once again we saw the soft solutions chosen by all the riders, both in Superbike and Supersport, despite the fact that the temperatures were not particularly high and that the riders in any case also had intermediate SC1 tyres available to them. This is very satisfying for us because it means that the developments and progress made over the last few months have allowed us to design a soft blend capable of operating even in temperatures that are not particularly high, allowing the riders to finish the races. In conclusion I would be remiss if I did not discuss what happened to Marco Melandri in Race 2: currently we can only make an objective assessment based on what the riders has told us. The tyre undoubtedly showed abnormal wear and Marco reported that he felt strong vibrations as early as the second lap. Neither Pirelli nor the team are able to determine yet whether these vibrations were caused by the tyre or by other factors, but both are committed to ascertaining the causes. The BMW Motorrad GoldBet SBK team delivered the tyre to us still mounted on the rim and we will conduct all the necessary tests, also verifying whether or not there may be problems with balancing or in any case connected to the tyre mounting and then in the laboratory we will examine the tyre. Obviously in these cases, no matter whether the problem may have been caused by a tyre defect or other external factors, we are sorry for Marco who rode a great Race 1 and certainly could have fought for the podium in Race 2 as well.” The 2013 Pirelli statistics for Portimão round: • Total number of tyres Pirelli brought: 4636 • Number of solutions (dry, intermediate and wet) for the Superbike class: 6 front and 7 rear • Number of solutions for the Supersport class (dry, intermediate and wet): 5 front and 5 rear Number of tyres available for each Superbike rider: 38 front and 40 rear • Number of tyres available for each Supersport rider: 30 front and 26 rear • Temperature in Race 1: air 18° C, asphalt 27° C • Temperature in Race 2: air 18° C, asphalt 23° C • Maximum race speed reached by Pirelli Diablo Superbike tyres: 307.7 km/h, in Race 1 by Chaz Davies (BMW Motorrad GoldBet SBK) at 17th lap. • Maximum race speed reached by Pirelli Diablo Supercorsa tyres in Supersport: 276.9 km/h, Kenan Sofuoglu (MAHI Racing Team India), 11th lap. For more information: Matteo Giusti +39 338 616 9251 matteo.giusti@pirelli.com Francescopaolo Tarallo +39 334 684 4307 francescopaolo.tarallo@pirelli.com