Jonathan Rea takes a double win astride his Kawasaki, winning Race 2 that started in the rain with a pit stop for a tyre change; in Supersport the win went to Kyle Smith on his Honda after a red-flagged race due to heavy rainfall 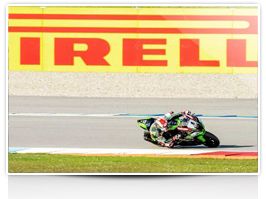 It was a Sunday affected by foul weather for the MOTUL FIM World Superbike Championship riders on the Dutch TT Circuit Assen. In Superbike Jonathan Rea (Kawasaki Racing Team), if there was still any doubt, once again confirmed that in the 2016 season he has no intention of handing over the World Superbike Champion title earned last year to anyone else without a fight. The Northern Irishman, after winning Race 1 on Saturday, repeated the excellent performance today in Race 2, earning the second double win of the season for himself and Kawasaki, taking his championship points to 181 to make it a 45 point lead over Chaz Davies (Aruba.it Racing – Ducati). In Supersport Kyle Smith (CIA Landlord Insurance Honda) was back on the top step of the podium, racing his Honda CBR600RR faster than all the rest in the driving rain. As for Pirelli, the star tyres of the day were the DIABLO™ Rain, the standard rain solution that were taken onto the track at Assen both with the Supersport riders at the second start after the race was red-flagged due to rain, and at the start of Superbike Race 2 due to the wet tarmac. 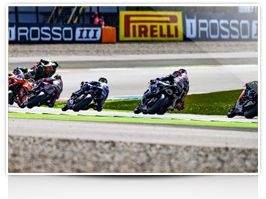 In Race 2 the riders lined up on the grid with rain tyres except for Sylvain Guintoli (Pata Yamaha Official WorldSBK Team) and Markus Reiterberger (Althea BMW Racing Team) who opted for intermediate DIABLO™ Wet tyres on the rear. At the beginning of the fourth lap, Nicky Hayden (Honda World Superbike Team) overtook teammate Michael Van der Mark, moving into second place behind poleman Tom Sykes (Kawasaki Racing Team), but the Dutchman took the position back a little later. In the meantime, Xavi Forés (Barni Racing Team) dropped from second to fourth and then to sixth place, also overtaken by Jonathan Rea (Kawasaki Racing Team) and Joshua Brookes (Milwaukee BMW). During the fifth lap, home town hero Michael Van der Mark took the lead with a brilliant move on Tom Sykes and, at the same time, Joshua Brookes got the better of Rea, stealing fourth place and moving in behind Sykes and Hayden. For a few laps Joshua Brookes led the race until the track started to slowly dry out and the riders began to return to pit lane to take off the rain tyres and mount other solutions. Of these, Jonathan Rea opted for slicks on both the front and rear, whereas his garage mate decided to go with intermediate tyres. At the end of the tyre change dance, Jonathan Rea found himself in the lead, followed by his teammate and Michael Van der Mark, who managed to take the third step of the podium today, receiving the well-deserved applause of his fans after his hard luck yesterday. 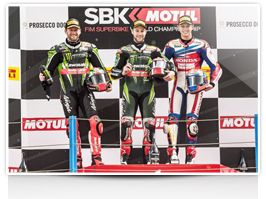 Race 2 standings: 1) Jonathan Rea (Kawasaki Racing Team) 2) Tom Sykes (Kawasaki Racing Team) 3) Michael Van der Mark (Honda World Superbike Team) 4) Lorenzo Savadori (IodaRacing Team) 5) Chaz Davies (Aruba.it Racing – Ducati) 6) Nicky Hayden (Honda World Superbike Team) 7) Alex Lowes (Pata Yamaha Official WSBK Team) 8 ) Davide Giugliano (Aruba.it Racing – Ducati) 9) Leon Camier (MV Agusta Reparto Corse) 10) Xavi Forés (Barni Racing Team)
This morning, before Race 2, the fourth round of the FIM Supersport World Championship was held.Despite winning pole position in yesterday's Superpole, at the start Randy Krummenacher (Kawasaki Puccetti Racing) was unable to capitalise on the advantage and already in the early laps he was overtaken by Luke Stapleford (Profile Racing), Kenan Sofuoglu (Kawasaki Puccetti Racing) and Patrick Jacobsen (Honda World Supersport Team). It was the American who overtook the Turkish rider to move into the lead in the sixth lap. Everything came to a halt in the eighth lap when the red flag came out due to a sudden heavy rainstorm that soaked the Dutch track and even caused race leader Jacobsen to crash, but he was able to make it back to the garage in any case. Everyone went back to pit lane to prepare for a quick restart with six laps left to race. Although the rain had stopped, the track was completely wet so all the riders rode back onto the grid with DIABLO™ RAIN tyres. The red lights went out and the two Kawasakis ridden by Krummenacher and Sofuoglu shot off the line followed by Jacobsen and Gino Rea (GRT Racing Team) who overtook the American in the second lap to move into third place. In the meantime, Lorenzo Zanetti (MV Agusta Reparto Corse) crashed out to end his race early. During the third lap the Turkish rider made a move to overtake his teammate and move into the lead. By the end of the race Gino Rea and Patrick Jacobsen had also managed to overtake Krummenacher, relegating him to fourth place. In the fourth lap it was a battle between Sofuoglu and Jacobsen for the lead, with Kyle Smith (CIA Landlord Insurance Honda) bearing down threateningly in the meantime, moving into third by overtaking Rea who, however, was then able to retaliate a lap later. A crash in the fifth lap forced Patrick Jacobsen to retire, leaving Sofuoglu, Smith and Rea to battle it out for the top step of the podium. In the end it was the Brit on his Honda, Kyle Smith, who crossed the wire first ahead of Gino Rea and Kenan Sofuoglu. 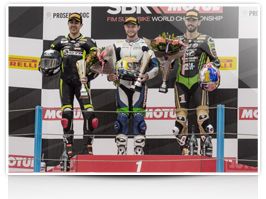 It was the top step of the podium for Italian Raffaele De Rosa (Althea BMW Racing Team) in the Superstock 1000 FIM Cup race. The Neapolitan rider, after his third place finish at Aragón, rode an impeccable race, crossing the wire in first place ahead of Jeremy Guarnoni (Pedercini Racing Kawasaki) and Michael Ruben Rinaldi (Aruba.it Racing - Junior Team), respectively second and third. The Pirelli solutions chosen by the riders for Race 2 and Supersport: Race 2 began with the asphalt still wet from the rain that had fallen moments before during the Supersport race. For this reason, most of the riders lined up on the grid with DIABLO™ Rain tyres, with only Sylvain Guintoli and Markus Reiterberger going against the grain to choose DIABLO™ Wet intermediate tyres on the rear, a risky decision considering the fact that the track was completely wet and one that proved to be a mistake since, from the start, both riders slowly slipped to the back. 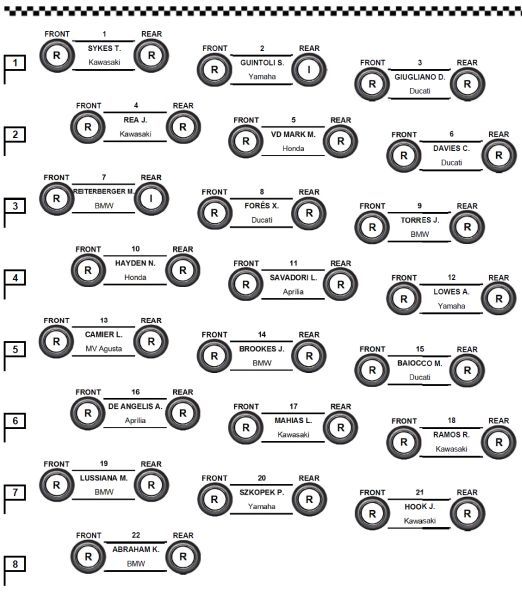 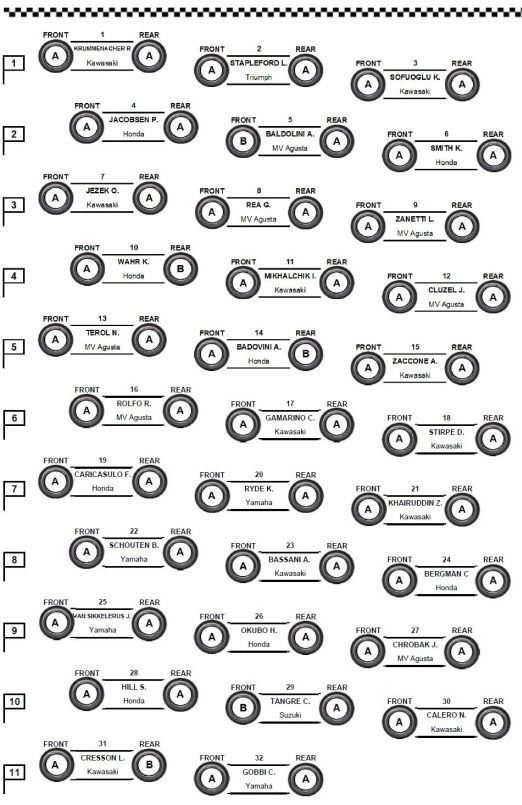