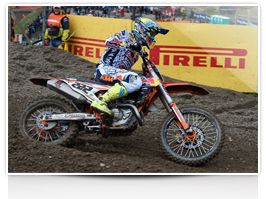 The steep walls of the northern Garda Dolomite mountains were the backdrop to the eighth round of the FIM Motocross World Championship - the Grand Prix of Trentino - which was held at the historic ‘Ciclamino’ circuit. The Italian track is made from hard-packed soil and due to thunderstorms that swept the area over the weekend churned deep and rough, straining bikes and riders in equal measure. In these conditions the riders equipped with Pirelli tyres were able to count on the excellent SCORPION™ MX32™ that confirmed incredible versatility allowing the Milan brand to continue a winning streak in Grand Prix this season. 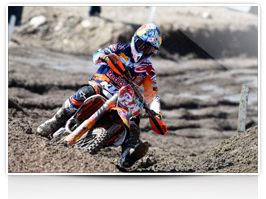 A great show in the MXGP class belonged - for the second time in a row - to Antonio Cairoli. The eight-time World Champion used the SCORPION™ MX32™ 110 / 90-19 rear and the brand new front SCORPION™ MX32™ PRO 80 / 100-21 developed for hard ground (and also used by Max Nagl) to win the first race and grabbed second place in the second. Behind him, Romain Febvre completed a strong GP after a feisty comeback in race one and then took the victory in the second moto. Trentino also saw a strong performance by Tim Gajser who preferred the SCORPION™ MX32™ 120 / 90-19 rear tyre for a larger contact patch and finished the Grand Prix on the third step of box while maintaining his leading position in the championship. Kevin Strijbos and Max Nagl completed yet another triumphant day for Pirelli in the premier-class getting fourth and fifth place overall. 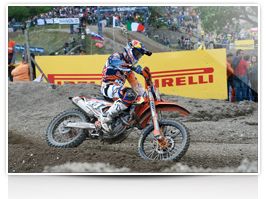