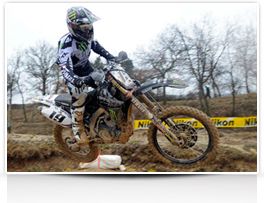 Pirelli enjoyed a winning weekend with domination of the prestigious Hawkstone Park International Motocross whilst also winning in the high level Italian and Dutch National Championships. The long established Hawkstone International event again brought out a quality field from around the World to do battle on the always rough and demanding, legendary circuit. In the MX1 class Clement Desalle took his Pirelli equipped Rockstar Energy Suzuki RMZ450F to a triple victory in the two class legs and MX1 final whilst his team-mate Steve Ramon earned a well-fought third. In the combined MX1-MX2 ‘Superfinal’ young British star Max Anstie made a fantastic return to England by taking his MX2 machine to victory ahead of the big 450’s. It was a fantastic day for the Pirelli supported CLS Monster Energy Kawasaki squad as Anstie’s teammate Tommy Searle also won the MX2 class in this important pre season event.

In Pirelli’s ‘home’ Internazionali d’Italia championship, Team Monster Yamaha duo David Philippaerts and Gautier Paulin took victory in the two classes whilst fellow Pirelli rider Antonio Cairoli continues to lead the MX1 series overall on his Team Red Bull Factory KTM. Paulin leads the MX2 series battle. And to complete this most ‘winningest’ of weekends Jeffrey Herlings took his Pirelli Scorpion MX-shod KTM 250SX-F to victory in the Dutch Championship. Pirelli Racing Manager Jason Griffiths commented “What a weekend for Pirelli in off-road! Great to see two young British riders doing so well in MX2 at Hawkstone and Desalle showed his class yet again. It’s particularly impressive to note that many of our top Pirelli runners were away at both the Italian and Dutch Championships which they also dominated. Gripping stuff!”