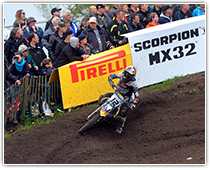 After the first three rounds held in Qatar, Thailand and Mexico, the FIM Motocross World Championship has now moved back to Europe, in Arco di Trento. On the hard, stony and low-grip track of the Italian circuit, Pirelli’s new front prototype tyres made their debut and were fitted in 80/100-21 size on the bike of Grand Prix MXGP winner Max Nagl. On the 5th seasonal round, the Championship moved to Valkenswaard, in southern Netherlands, where the riders were tested by the sandy but consistent track which warped during the race. Pirelli claimed 2nd and 3rd place with Nagl and Clément Desalle, thanks to the excellent performance of the SCORPION™ MX32™ in 80/100-21 front and of the SCORPION™ MX410™ in 120/80-19 rear. The Spanish circuit of Talavera de la Reina, with its uphills and downhills and a consistent and tricky soil track, hosted, for the second year in a row, the Grand Prix of Spain. Antonio Cairoli opted for the first time for the KTM 450, equipped with SCORPION™ MX32™ in 80/100-21 front and 110/80-19 rear, and obtained his first victory of the season. Cairoli dominated also the round held on the British circuit of Matterley Basin, characterised by medium-hard terrain. The Italian rider claimed the 6th Grand Prix winning in the UK of his career.  The eight-time World Champion chose to run on SCORPION™ MX32™ 80/100-21 front and, for the first time, 120/90-19 rear, a size more suited to his powerful 450SX-F. The 8th round of the FIM Motocross World Championship 2015 was held in Villars sous Ecot. The French circuit hosted a Grand 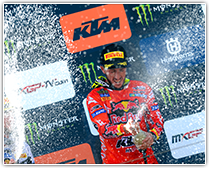 Prix for the first time after a twenty-year break.  With its very hard-packed surface and its frequent uphills and downhills, the track put the tyres through a hard test. Romain Febvre, thanks to the Pirelli SCORPION™ MX32™ 80/100-21 front and 110/90-19 rear, won his first Grand Prix in the MXGP class, much to the delight of his home crowd.  Third place overall went to Cairoli. Like his opponent in the fight for the title – Max Nagl – Cairoli chose to run with the new prototype front tyre developed by Pirelli in 80/100-21 size.  The new tyre combined with the SCORPION™ MX32™ 120/90-19 rear delivered excellent performance on the difficult French track. Nagl, fourth overall, continues to lead the Championship ranking with 19 points over the Sicilian rider.