Pirelli dominates the first 3 rounds of the FIM Championship The SCORPION™ MX tyre continues its lead in the FIM Motocross World Championship. Pirelli got off to the best possible start with  Jeffrey Herlings’s victory at the opening round in Qatar. This was then followed by Antonio Cairoli’s double victory in the brand new MXGP class, previously named MX, at the second round in Si Racha (Thailand). Pirelli tyres performed excellently also at the third round in Beto Carrero, Brazil. Cairoli put in one of his outstanding performances on the KTM, winning both the first and second manche, followed by Pirelli riders Clement Desalle and Jeremy Van Horebeek who have now moved to fourth and third overall in the Championship ranking respectively. 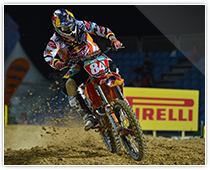 With Jeffrey Herlings sidelined due to a shoulder injury suffered in the Dutch Championship, Swiss Kawasaki CLS rider Arnaud Tonus made the best of things in MX2 to claim his career first GP win and the FIM MX2 World Championship red plate.  Runner-up was the Dutchman Glenn Coldenhoff, who is now second in the Championship standings, followed by other Pirelli riders Dylan Ferrandis and Herlings.

Pirelli dominates the first 3 rounds of the FIM Championship
Newsroom