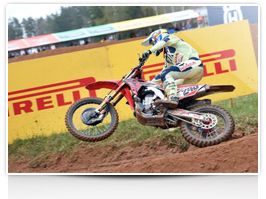 After negotiating the Americas rounds in Argentina and Mexico, the FIM Motocross World Championship came back to Europe for the sixth round of the season and the Grand Prix of Latvia. The picturesque circuit of Kegums, surrounded by lush forests of the Baltic country, is characterized by sandy soil and a hard and bumpy base that the riders with Pirelli were able to tame thanks to the product’s excellent performance and versatility offering traction and drive. Hard fought and spectacular races in MXGP ultimately saw the top step of the podium belong to Tim Gajser for the fourth time this season. The Slovenian rider, equipped by SCORPION™ MX Soft 410 120/80-19 rear and the SCORPION™ MX32™ 80/100-21 front, won the first heat and enacted an awesome comeback from twenty-first to fourth in the second after a fall in the early laps. There was also an excellent performance by Antonio Cairoli, who with the same Pirelli tyres as the winner, grabbed second place overall. Some mistakes slowed Romain Febvre in the first moto but the Frenchman won the second and obtained third position in the Grand Prix standings. The defending No.1 retains the top spot in the championship table just one point ahead of Gajser. Good races were had by Jeremy Van Horebeek and Max Nagl who finished in fourth and fifth place overall. 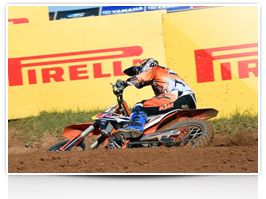 No surprises in the MX2 class. The races were dominated for the sixth time in six races by Jeffrey Herlings. The Dutch rider won the qualifying heat and the two motos leaving his opponents to fight for the second position and did so thanks to SCORPION™ MX Soft 410 110/90-19 rear and the SCORPION™ MX32™ 80/100-21 front. Max Anstie showed his great skills on the sand and grabbed second place overall, while Jeremy Seewer scored an excellent third position. To complete a positive day for Pirelli in MX2 fourth place was filled by Petar Petrov and fifth for Dylan Ferrandis back in action after the shoulder injury he suffered in Thailand. Pirelli enjoyed success in the first round of the EMX125 European Championship and in the second outing of EMX300 won by Jago Geerts and Yentel Mertens, the same riders lead the championship in both classes. Next weekend riders will tackle the Grand Prix of Germany, hosted at the Teutschenthal circuit. Race results: 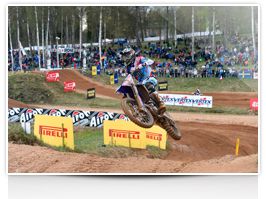 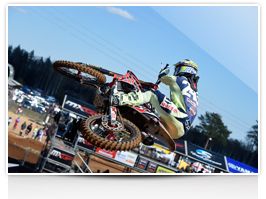 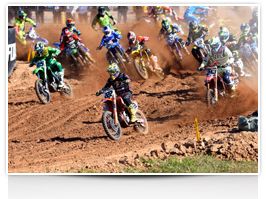