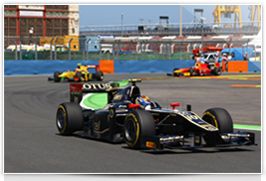 Pirelli’s GP2 and GP3 tyres in Valencia faced exactly the same challenge as their Formula One equivalents: significant energy loads going through the tyres, 25 corners, and high temperatures. Although Valencia is a street circuit – the second consecutive one that GP2 and GP3 has raced on after Monaco – it is faster and more demanding than many permanent facilities, with the added hazard of concrete walls close to the track that do not forgive any mistakes. The GP2 feature race was characterised by no fewer than three safety car periods that severely compromised the strategy for pole-sitter James Calado (Lotus). With the P Zero soft and supersoft tyres available, there were many interesting tactical possibilities. All the drivers used the supersoft to qualify, with only two drivers – Caterham’s Rodolfo Gonzalez and Addax driver Johnny Cecotto – using them during the race. Calado started on a new set of soft tyres, but the assorted safety car periods meant that he got out of sync with his rivals, finally being forced to pit for a used set of softs with only five laps to go in order to comply with the regulations – even though there was plenty of life left in his original set of tyres. 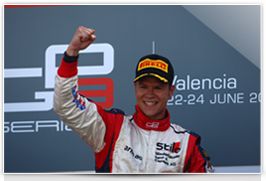 This allowed Esteban Gutierrez, Pirelli’s inaugural GP3 champion in 2010, to claim his first GP2 feature race victory for Lotus, having started on a used set of softs and then changed to new softs on lap 11 of 28. The six drivers behind him all completed the race by using two sets of used soft tyres, underlining the durability of the Yellow tyre on even the most demanding of circuits. Gutierrez, who moved up to third in the championship behind DAMS driver Davide Valsecchi and Arden’s Luis Razia, said: “The strategy played quite a big role in this race, because after the pit stops I had new tyres, and these helped me a lot to go forward and to gain more positions, especially in the last few laps.” The 23-lap sprint race on Sunday, directly before the Grand Prix of Europe, was also won by Razia and again characterised by the use of the soft tyre, which proved to be well-suited to the high braking and traction demands of Valencia in even warmer weather than the day before. Calado again started from pole after being promoted to eighth in race one following some penalties for his rivals because of their on-track incidents. The final lap was one of the closest in GP2 history, with four drivers battling for the podium all the way to the chequered flag, before Razia passed both Fabio Leimer (Racing Engineering) and Calado in the closing stages to take a dramatic victory, as their tyres degraded to ensure a grandstand finish. The GP3 drivers only had the soft tyre at their disposal (with three sets available, as per the regulations) so had to take great care to look after them in the warm conditions of Valencia: the hottest race that GP3 has faced so far this year. New Zealander Mitch Evans (MW Arden) took his third victory of the year in the feature race with a perfect grand slam of pole, win and fastest lap, to regain the championship lead after a race-long battle with second-placed Aaro Vainio. He said: “The tyres were a bit of an unknown before we came here, but actually they managed to be OK for most of the race. At the end, I just pinned my ears back and tried to go for fastest lap, which I think we managed to do.” Swiss driver Patric Niederhauser took his first victory GP3 victory for Jenzer in the sprint race on Sunday morning, becoming the fifth different winner in six GP3 races: perfectly reflecting the closeness of the competition in Formula One, which is also equipped by Pirelli. Pirelli’s racing manager Mario Isola said: “Circuits such as Valencia, with its varied and complex demands, is not easy for drivers who are still learning about the intricacies of racing at such a high level – and the many incidents in the GP2 feature race underlined this point. As a result, Calado lost out on victory because his strategy was compromised by the appearance the safety car, while Gutierrez’s decision to use a new set of soft tyres at the end of the race paid off. In GP3, as was again the case in the GP2 sprint race, we saw some very close racing once more, perfectly reflecting the current situation in Formula One. In the GP2 sprint race, the leading cars closed up to each other over the final three or four laps as their tyres degraded; a sign that we are achieving what we are asked to do by the championship organisers. Challenging situations such as these and closely-matched racing is going to prepare these young drivers perfectly for the demands they will face in their future careers.” The GP2 and GP3 Series both resume at the British Grand Prix from 5-8 July. Copyright-free video news releases featuring interviews with Paul Hembery, as well as photographs and press releases are available for media use from: www.pirelli.com/f1pressarea (Login: PirelliPressArea - Password: PirelliMedia). Follow us on Twitter @ Pirelli_Media or Facebook on www.facebook.com/Pirelli. Please also visit the Pirelli F1 blog at www.pirelli.com For further information please contact