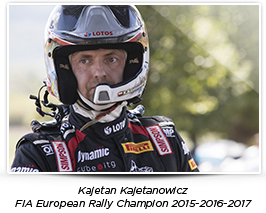 Poland’s Kajetan Kajetanowicz, co-driven by Jaroslav Baran in a Pirelli-equipped Ford Fiesta R5, has sealed the European Rally Championship for the third consecutive year: a unique achievement in the series’ history.

Not only that, but Pirelli drivers have claimed all the 2017 titles in the different categories of this year’s European championship as well.

These incredible results were confirmed at the end of the eighth and final round of the European championship season today, Latvia’s Rally Liepaja.

Completing a triumphant day, Pirelli drivers locked out the podium on the event, which also featured some heavy rain that highlighted the capabilities of the Italian tyres in muddy conditions. The winner of Rally Liepaja was 20-year-old Russian driver Nikolay Gryazin in a Skoda Fabia R5, following an intense battle with Kalle Rovanpera. The young Finn was taking part in his first rally armed with a driving licence (having only turned 17 on October 1) at wheel of a Ford Fiesta R5 for the first time.

Latvia highlighted the skills of Pirelli’s younger drivers, which the Italian firm is proud to support as a fundamental part of its motorsport strategy. As well as Rovanpera, 16-year-old Oliver Solberg – the son of Petter Solberg, who won the World Championship with Pirelli and Subaru in 2003 – performed strongly on Rally Liepaja in a Peugeot 208 R2.

Quote Pirelli rally activity manager Terenzio Testoni said: “This latest result brings our achievements in 2017 to a brilliant conclusion. And it’s a result that is significant for many reasons. The European championship is the key international series for privateer drivers. There’s an extremely varied calendar in terms of conditions, weather and terrain – which makes it extremely demanding and important when it comes to demonstrating the capabilities of our products: P Zero for asphalt, Scorpion for gravel and Cinturato for rain. The European championship has also emerged as the principal arena for up-and-coming stars of the future: an integral part of Pirelli’s sporting philosophy. Special congratulations to Kajetan Kajetanowicz, who becomes the first driver to win the European Rally Championship three consecutive times.”