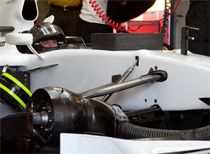 As Pirelli gears up towards its first Grand Prix in 20 years next season, the intensive test programme has continued at Jerez in southern Spain with Nick Heidfeld at the wheel of the Toyota TF109 used for Pirelli's pre-season development. Giorgio Pantano also drove the new GP2 car at Jerez, which will run on Pirelli rubber from next year as well. The 4.43-kilometre Jerez circuit has hosted both the Spanish and European Grands Prix in the past, and it is a popular venue for Formula One testing due to its technical configuration and year-round warm weather. Conditions on the first day of Pirelli's test were extremely hot, peaking at 38 degrees centigrade with bright sunshine. The second day was cooler and more cloudy, with a high of 34 degrees centigrade. The Jerez circuit contains quite a wide variety of corners, ranging from slow curves to some medium to fast bends. The layout puts particular emphasis on rear tyres, which have to work hard to supply the best traction throughout an ample range of speeds. While Jerez does not result in especially high top speeds, every aspect of a car's performance is comprehensively tested there. Heidfeld completed nearly 100 laps of running on the opening day and a similar distance on day two. The objective of the tests was to finalise development on tyre construction, prior to the next test in Monza in a week's time when most of the work in this area will be completed. At the same time, Pirelli's development engineers also tried out a range of different compounds, as they focus on preparing the four slick options that will be offered to all the Formula One teams next year. At the test in Monza next week, former Renault Formula One driver Romain Grosjean will drive for Pirelli for the first time. Heidfeld is being released from his contract following the announcement that he will drive for Sauber for the rest of this season. Pirelli's Motorsport Director Paul Hembery commented: "We'd like to thank Nick for his very valuable contribution to our tyre development programme and we wish him all the best for the future. In order to avoid favouring any individual team, we have jointly decided to release Nick from his contract and now we have chosen Romain to test for us in Monza. He's packed a lot of experience into a short space of time, including all our GP3 tyre development, so I'm sure he'll be able to give us some very useful feedback. The tests here at Jerez have gone extremely well and we completed all the work that we planned over the two days. Now we move onto Monza, where our task will be to finalise the construction before we focus further on compounds."