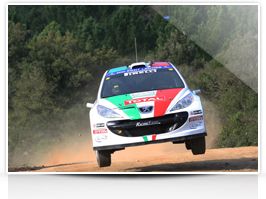 Pirelli provided two drivers on two different rallies with a winning advantage last weekend as victories were claimed across Italy with the assistance of Pirelli P Zero asphalt and Pirelli K6 gravel tyres. Polish driver Robert Kubica won the Rally di Como on his debut in a Citroen C4 World Rally Car with the help of Pirelli P Zero asphalt tyres. The former Formula One driver reached the finish 30.9s ahead of second-placed Felice Re who was using a mix of Pirelli P Zero RX 9 soft and RX 7 medium compound tyres on his Citroen C4. Re’s second-place finish also means the driver has won the 2012 Trofeo Asfalto title (Asphalt Rally Trophy). "I am pleased to win a rally that is so difficult, it has been a real adventure,” said Rally di Como winner, Kubica. "It was a good test ahead of the Rallye du Var in France and has helped me to understand the Citroen C4 a little better.” During the same weekend, Peugeot clinched the Italian Rally Championship manufacturers' title thanks to Paolo Andreucci who took the victory on the championship’s closing round, Rally Costa Smeralda. Piloting a Peugeot 207 S2000 on Pirelli K6 soft gravel tyres that are ideal for slippery conditions, Andreucci carved a 39-second winning advantage over the course of the two-day event. The Peugeot Italia driver was crowned the drivers’ champion for the sixth time at Rally Sanremo back in October. Stefano Albertini, the winner of the 2010 Italian Junior Rally Championship, finished third in Sardinia in another Pirelli-equipped Peugeot. The 25-year-old ends the year third in the overall championship standings. Pirelli also helped Peugeot 207 S2000 driver Mauro Trentin clinch the hotly-contested Trofeo Terra championship title, as well as the Production car title with Fabio Gianfico at the wheel of a Pirelli-equipped Mitsubishi Evo 9. Pirelli’s product manager Terenzio Testoni: “The 2012 rally season has been outstanding for Pirelli: we have won a host of rounds in the Italian Rally Championship as well as the overall drivers’ and manufacturers’ titles. Special congratulations must go to Paolo who has been crowned the Italian drivers’ champion for the sixth time. It was also fantastic to hear that Robert took a win with Pirelli on his debut in a Citroen World Rally Car. The feedback from both the K6 gravel tyres and the Pirelli P Zero asphalt medium and soft tyres has been very positive, and to beat off the competition on both a gravel and an asphalt rally over the weekend is of huge credit to the durability, strength and versatility of Pirelli tyres.”