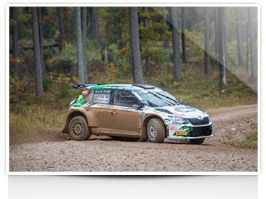 Pirelli tyres have equipped the youngest-ever rally champion in the history of the sport: Kalle Rovanpera from Finland, who won the Latvian Rally Championship overall aged just 16 this weekend, driving a Skoda Fabia R5. Rovanpera, who has used Pirelli tyres since he started rallying competitively last year, is so young that he is not even allowed to drive on the road sections linking each stage: instead that task falls to co-driver Risto Pietilainen. However, Rovanpera is able to benefit from special sporting regulations that allow underage drivers to compete on rallies in Latvia by driving on the stages. Kalle Rovanpera is the son of Harri Rovanpera, who competed with Pirelli on the World Rally Championship with Peugeot and Mitsubishi, before finishing his WRC career in 2005 after one win and 15 podiums. Coached by his father, Kalle has been driving since he was eight years old, learning his craft on the frozen lakes of Finland. Kalle Rovanpera’s Skoda was run by the TGS team headed up by Toni Gardemeister: another former Pirelli driver on the WRC with the factory SEAT team. 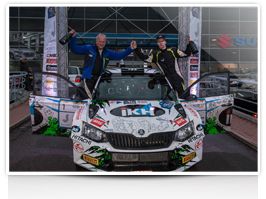 “My ambition is to go the World Rally Championship one day, but I have to do everything step by step,” said Kalle Rovanpera. “Already, I am very surprised and happy with the progress I have made. My feeling with the Pirelli tyres has always been very good, and I have many people to thank – especially my co-driver Risto, who also co-drove for my father – for our success so far.” Pirelli has always put the accent on youth in rallying, thanks to ground-breaking initiatives such as the Pirelli Star Driver scheme in conjunction with the FIA, as well as the WRC Academy – which have produced a number of today’s top factory stars such as Ott Tanak and Craig Breen. Rovanpera’s latest achievement is the most extreme example yet of the company’s association with up-and-coming talent. The Finn has led the Latvian championship since the start of the year, winning five rallies this year on Pirelli’s Scorpion range of gravel tyres. Pirelli’s motorsport director Paul Hembery commented: “Congratulations to Kalle on his remarkable achievement, guided by a team of people who also achieved success with Pirelli in the past. Bringing on young drivers is a key priority for us in both rallying and racing, so it’s encouraging to see the future talent emerge so spectacularly.”