Pirelli-equipped Italian Rally Championship leader Paolo Andreucci will face what he describes as one of the toughest Mille Miglia rallies of his career this weekend, due to a highly-competitive field of entrants and some adverse weather conditions. The second round of the Italian Rally Championship takes place on asphalt roads close to Brescia: the start and finish point of the classic ‘Mille Miglia’ road race, which became on of the most famous events in Italian motorsport history. The event is also a scoring round of the prestigious European Rally Championship. Conditions on the Mille Miglia are expected to be extremely difficult this year, with rain expected on both Friday and Saturday when the rally takes place. Along with the other Pirelli runners, Andreucci will be able to use the RX tyre for dry and mixed conditions, as well as the RE tyre for wet and damp conditions. These tyres can be hand-cut, according to Italian Championship regulations, allowing them to disperse more water or debris and heat up quicker. A variety of different compounds are available: the lower the number, the softer the compound. Preliminary weather reports in the Lombardy region suggest that the soft and medium compounds would be best suited to the temperatures expected on this weekend’s all-asphalt rally. On Friday, the RE7 and cut RX9 should be ideal for the short stages and wet weather. On Saturday, conditions are expected to dry up progressively. A similar tyre choice to Friday is expected for Saturday morning, while in the afternoon the RX7 tyre could come into its own, which has shown itself to be both fast and reliable in mixed conditions. Andreucci, who is bidding for his sixth victory on the Mille Miglia – partnered by co-driver Anna Andreussi in his Peugeot Italia 207 S2000 – said: “I think it could be a very complicated rally this year but we are well-prepared. We can rely on the usual RX and RE tyres, which have served us very well in the past and are capable of extremely effective performance in a wide range of conditions. The quality of the entry list is very high this year too: we have drivers such as Giandomenico Basso and Umberto Scandola, local to the region, as well as Juho Hanninen, who is a factory Skoda driver and IRC champion. So I’m expecting this to be one of the toughest and most unpredictable rallies of the year, where I’ll be relying heavily on my tyres.” The Mille Miglia rally also marks the first outing for Stefano Albertini at the wheel of a Pirelli-backed Peugeot 207 S2000. The 25-year-old has been given the drive on at least four rounds of the Italian Rally Championship this year as the result of a joint initiative between Pirelli and CSAI, the Italian motorsport federation, in a bid to encourage the next generation of young talent. “I’m really looking forward to making my debut,” said Albertini, a former winner of the Italian Junior Rally Championship with Pirelli. “I’ve never driven on any other rally tyres throughout my professional career, so I know that Pirelli will do a fantastic job. But obviously it’s down to me to learn the car, which is a big step up from what I am used to, in a very short space of time.” In addition to supplying tyres to Andreucci and Albertini, several other frontrunners will rely on Pirelli tyres. Giandomenico Basso will make his debut with the Ford Fiesta WRC regional car: the first time that this specification of car (essentially a WRC machine with a smaller turbo restrictor) will be seen in Italy. Alessandro Perico and Matteo Gamba will both drive a Peugeot 207 S2000. In the Junior championship, Citroen DS3 R3T driver Simone Campedelli returns to defend his title with Pirelli this year. The Italian firm will also equip the Renault Twingo R2 Trofeo, which competes on the Mille Miglia. Following a start ceremony and spectator superspecial stage in Brescia on Thursday 19 April the rally route takes competitors over eight stages on Friday totalling 126 competitive kilometres. The action concludes on Saturday with six more stages before the finish in Brescia, making a total competitive distance of 256 kilometres. For more information about Pirelli, please contact Anthony Peacock on +44 7765 896930 or anthony@mediatica.co.uk 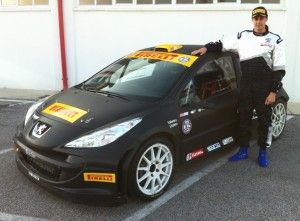