California will hosts the production derived series World Championship for the fourteenth time: Pirelli rely mostly on ‘range’ solutions for both front and rear tyres 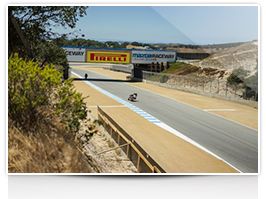 This week MOTUL FIM World Superbike Championship is heading to Mazda Raceway Laguna Seca for the last race weekend before a long summer break. The ninth seasonal round will see on track only WorldSBK class riders, while for all other categories the next round will be at Lausitzring, Germany, September 16th to 18th. At the end of this race weekend the Mazda Raceway Laguna Seca will host a Pirelli SBK® Track Day, an event scheduled for Monday, July 11th where the House of the Long P will entertain journalists, opinion leaders, distributors and retailers for a day of track activities. Pirelli, Sole Tyre Supplier since 2004, has prepared for the US race mostly its range solutions to face this challenging track, full of ups and downs with frequent load transfers that stress both front and rear tyres. Moreover the proximity to the sea causes surface temperature leaps between morning and afternoon sessions. The Milanese Company has identified three different solutions for the rear tyre: in addition to SC0 and SC1 range options, riders will count also on T1257, a development compound of the SC0. For the front tyre there will be available both standard SC2 and SC3 range solutions together with the S1699, a well-known SC1 development compound. Moreover in the case of rain, riders can also rely on a development solution for the rear tyre, in addition to the wet range one. Northern Ireland’s Jonathan Rea (Kawasaki Racing Team) presents himself at Laguna Seca as the Championship’s leader with 343 points: the reigning World Champion has been on the podium at every race in the first eight rounds this season and boasts a lead of 66 points over his teammate and Championship contender Tom Sykes (Kawasaki Racing Team), on 277 points. Rea and Sykes have signed a one-two in both races at the end of the last round in Misano Adriatico, thus gaining valuable points on Chaz Davies (Aruba.it Racing – Ducati), currently third in the World Standings with 244 points. The Welsh rider last year achieved a perfect result at Laguna Seca, conquering the Superpole and his first double victory on a Ducati. Kawasaki is leading the Manufacturers Standings with 371 points with an advantage of 74 over Ducati, which is following with 297 points. Honda is currently third on the Manufacturers podium with 215 points. 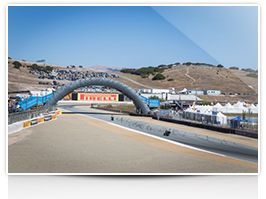 Mazda Raceway Laguna Seca is located in Monterey County, in the heart of the Central California Coast, an area with a strong motorcycle vocation: in the Fifties this county hosted races on public roads called the Pebble Beach Road Races. As seen in the great success of these competitions, at the end of the decade the promoters decided to move the competitions inside a closed and adequate structure to raise safety standards. Laguna Seca circuit was born this way, whose current configuration has a length of 3610 metres in a counterclockwise direction, with a width of 15 metres throughout the whole circuit. Among the 11 curves (7 on the left, 4 on the right) there is the famous Corkscrew, a chicane at the top of the hill which is situated on a steep slope. Ridden at 80 km/h, where the tyres are being affected by rapid changes of direction on the camber especially on the front, instead forcing the rear tyre to fast load transfers from side to side. After reaching the minimum length required by the FIM, approved in 1988 thanks to the construction of the section between turns 2 and 5, the Mazda Raceway Laguna Seca has undergone a new restyling between 2005 and 2006, with several works designed to provide further rider safety: the expansion of escape routes, the replacement of the curbs and the displacement of some safety protection, as well as small maintenance work next to the bump before the Corkscrew. The solutions for Superbike class On the occasion of the US round Pirelli brings to the track a total of 1785 tyres, all destined to the Superbike class riders, the only one to race at Laguna Seca. To better face any situation Pirelli has a wide range of tyres for this race weekend. As regards the slick tyres, for the front, in addition to the SC2 and SC3 range, there will be available the SC1 development tyre S1699, one of mostly used solutions by the Superbike grid, which can offer the riders greater grip, an important element on a track like Laguna Seca. For the rear tyre there are two soft solutions and a medium one: together with the standard SCO, riders can rely on the SC0 development tyre T1257, or in case of low temperatures, which are typical to the early morning hours, they can rely also on SC1 range one. As always in the case of wet conditions, Pirelli will provide both DIABLO™ Wet – the intermediate - and DIABLO™ Rain tyres. In particular at Laguna Seca there will be available two rear wet tyres; a range and a new development one.