Pirelli for the development of photovoltaic energy in the USA 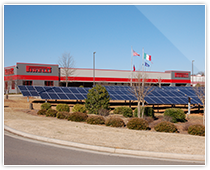 The photovoltaic plant in Rome, designed by Pirelli in partnership with Hannah Solar as part of the Georgia Power Advanced Solar Initiative, is now running. All the tests have been successfully completed and the plant is already providing energy to the Georgia Power’s energy grid. 1960 solar panels on a 3-acre property right in front of Pirelli’s manufacturing plant will generate 500 kW of power, leading to a reduction in CO2 emissions of 300 tons a year. Landscaping at the facility will soon be completed. Future development of an ecosystem underneath the photovoltaic panels will include cultivation of red clover, a plant highly resistant to droughts, which not only provides a natural fireproof barrier but also fosters the creation of habitats for birds nesting and for small wild animals. The Rome energy plant is actually a logical consequence of the growing international photovoltaic market. According to the figures of the “Solar Energy Report 2013", an annual study carried out by the Energy & Strategy Group of the Politecnico of Milano which analyses the dynamics in the photovoltaic sector, the USA is one of the countries worldwide with the most significant growth in solar energy, with about 4.2 GW of newly installed capacity in 2013. Japan dominates the sector with a newly installed solar panel capacity of 6.3 GW, followed by China with 5.0 GW, while Europe, compared to non-EU countries, lags behind and has lost its leadership in the solar energy market.

Pirelli for the development of photovoltaic energy in the USA
Newsroom