Having run its Formula One PZero tyre for the first time in Italy last month, Pirelli's eagerly-anticipated Formula One test campaign continued this week at the Le Castellet circuit in the south of France, again with Nick Heidfeld at the wheel of the Toyota TF109 fitted with Pirelli's latest Formula One tyres. 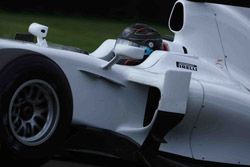 The Italian firm won the tender to supply tyres exclusively to the FIA Formula One World Championship from 2011-2013 earlier this year, and since then a concentrated campaign of research and development has been ongoing to prepare for Pirelli's first Formula One season in 20 years. With the initial shakedown work at Mugello from August 17-18 proving to be extremely successful, Pirelli continued its development programme at Paul Ricard for two days, working on both constructions and compounds as per the planned schedule. At the same time, Italian driver Giorgio Pantano continued to test Pirelli's GP2 tyres, which will also make their debut next season as part of a three-year tyre supply agreement that takes in the entry-level GP3 series as well. Temperatures in the south of France remained warm throughout both test days, with an average ambient temperature of 24 degrees Centigrade and average track temperature of 28 degrees Centigrade. The Le Castellet circuit, which has recently been developed into a high-tech test facility, can be driven in a number of different configurations. Pirelli's test team made full use of the circuit to run a high-speed configuration, enabling the engineers to assess the performance of the tyres under extreme loading as well as through slower and more technical sections. Throughout both days of the test, the car and the tyres performed perfectly. The performance of the new rubber, as well as its consistency and reliability, fully matched Pirelli's expectations - as motorsport director Paul Hembery explained. "We're very happy with the progress we've made so far, which actually puts us slightly ahead of where we expected to be at this point in time," pointed out Hembery. "We worked through an initial development programme that has given us a useful insight into the performance of our prototype tyres under a wide range of conditions, corners and speeds. We've been hugely encouraged by what we've seen up to now, and that's been helped by both Nick's clear and precise feedback, as well as all the different possibilities afforded to us by the Paul Ricard circuit." Pirelli's test programme will continue in Spain in two weeks' time. In the meantime, the company will take to the track at Monza for the finale of this year's GP3 Series from September 11-12, which is exclusively supplied by Pirelli in its inaugural season.