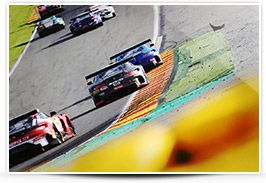 Pirelli will also be sole tyre supplier for the GT4 European Series and Blancpain GT Sports Club, which run during the same weekend.

What's the circuit like?
Circuit de Barcelona-Catalunya measures 4.727 kilometres, with 14 corners and a long straight making it an all-rounder circuit. With many fast turns and an abrasive surface, it is a demanding track on tyres. The lap record of 1:21.670 was set by Kimi Raikkonen in 2008 with Ferrari in Formula 1.

Which tyres is Pirelli bringing?
Pirelli will bring its P Zero DHD tyre for the provisional Blancpain GT grid of 51 cars and Blancpain GT Sports Club grid of 26 cars. The GT4 European Cup will use the P Zero DH slick tyre. Temperatures are expected to be high and rain isn’t anticipated at the moment, but in case of wet weather all the championships will use Pirelli’s Cinturato WH tyre.

What are the most likely race strategies?
Qualifying and the main race for the Blancpain GT Series Endurance Cup both take place on Sunday 1 October. There are three sessions of 15 minutes for qualifying and the race lasts three hours. During the race teams will pit two times to change driver and tyres. The length of the pit stop is regulated so it is important for teams to plan when to stop to maintain track position.

Quote:
Matteo Braga, circuit activity manager: “This is the first time that the endurance format has run at Circuit de Barcelona-Catalunya as last year was a sprint race. Tyres will be subject to a high level of stress as Barcelona is quite aggressive on tyres due to the long corners. Teams will have to work to find the right balance between performance and consistency while ensuring that they have a good strategy. ”

Timings: Blancpain GT Series Endurance Cup free practice takes place at 09.00 on Saturday 30 September followed by pre-qualifying at 16.40. Qualifying is on Sunday 1 October at 09.00 with the main race at 15.00.