The tyre supplier for the factory derived world championship has been working on new development solutions but, at the same time, is inviting teams to respect the minimum pressures and the correct utilization of the tyre warmers 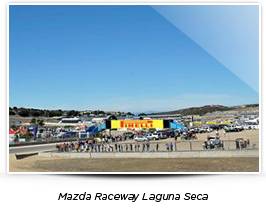 From 7 to 9 July 2017 the historical and fascinating Californian circuit of Laguna Seca will host the MOTUL FIM Superbike World Championship for the fifteenth time and for the fifth consecutive year. As usual, only the riders competing in the WorldSBK class of the Championship will be attending the American round. For the riders of all the other classes, the next round will be at Lausitzring, which takes place from 18 to 20 august 2017 in Germany.

After the difficulties that occurred with the riders Jonathan Rea, Michael Van Der Mark and Jordi Torres during the Donington Park and Misano rounds, Pirelli has made punctual and accurate analysis on the rear tyres concerned, but no evidence was found that might link the problems to a certain element composing the tyres. On the other hand, it clearly turned out that the damage was caused by excessive stress to which the tyres had been subjected. In particular, in the case of Misano, the high temperatures of the asphalt together with other variables, for example the pressures, have certainly contributed to abnormaly increasing the internal temperature of the tyres, causing the problems that occurred.

Pirelli has therefore made an additional development step for Laguna Seca and will be attending the event with two new rear development solutions. In the meantime, the exclusive tyre supplier invites the teams to respect the minimum pressures and to correctly use the tyre warmers. In particular, Pirelli reminds that, as already stated at the beginning of the year, the rear tyres must have a minimum usage pressure of 1,65 bar (23,9 PSI) from the first lap of the race, as lower pressures might damage the tyre.

Giorgio Barbier, Pireli Moto Sports Activities Director, stated: ”I believe it’s really evident to everyone that over the last few years Pirelli has been significantly increasing the level of performance of the tyres used in the Superbike World Championship. Which, it is good to remind, are standard products regularly purchasable on the market and not prototypes like the ones used in MotoGP™. With time, the power and the technological level of the bikes has also clearly increased compared to the past. The more the level of the tyre’s performances increases, the more the product’s “sensitivity” to the smallest of external variables, such as the pressures, increases. After what happened in the last two rounds we have decided to carry out an additional step for our product’s development, and we will continue to do so because we want to match the excellent performance with maximum reliability, which has always been a characteristic our tyres.We should also mention the fact that the product’s development hasn’t progressed at the same speed as Pirelli’s possibility to monitor its tyres during the race. In other championships the tyre manufacturer is able to know, in real time, the pressure as each bike is equipped with pressure sensors. For us, this kind of control is currently impossible as not every team has pressure sensors. The pressures, together with a correct utilization of the tyre warmers, play a very important role in allowing tyres with an extremely high technological level to work properly”. The Mazda Raceway circuit of Laguna Seca has a length of 3,610 metres (2,243 miles) with 7 turns on the left and 4 on the right. The track has a width of 15 meters and runs in a counter clockwise direction. The particular position of the circuit, situated on a hill not far from the sea, might give rise to large variations in asphalt temperature between morning and afternoon sessions. In some specific sections of the circuit, like the famous “Corkscrew”; a spectacular chicane located at the top of the hill which is situated on a steep slope and is ridden at about 80 km/h, the front tyres are being affected by rapid changes of direction in counter slope, whereas, at the same time, the many load transfers from side to side might compromise the rear tyre’s grip. Another particular section is the finishing straight which is quite short and has two light changes of direction, where the maximum speed (about 260 km/h for Superbikes) is reached. A good ride through the right curves 3 and 4 allows is essential for a good lap time, which is why it is really important that the tyres have excellent behaviour on slow turns of about 90° too.

The solutions for WorldSBK class As mentioned, only the riders competing in the WorldSBK class will be going on track in Laguna Seca and Pirelli, as usual, will be providing them with different slick solutions in addition to the intermediate and wet solution useful in case of bad weather. As for the slick solutions, every rider will be able to chose between three different options for the front and two for the rear. For the front, they will have available the standard SC1 (soft) and SC2 (medium) solutions and, as a third option, the development SC1 V0952 solution. This features the same compound as the standard SC1 but with different structural solutions and has been the most used front solution for the last rounds. As for the rear, Pirelli will provide riders with two development solutions: the W0575, featuring the same compound as the standard SC0 but with solutions and structural characteristics succesfully used in the past. They willl also have the W0576, again in soft compound and also featuring technologies and structural characteristics already used by Pirelli with excellent results in the past.