Pirelli GP2 and GP3 compounds rise to challenges of Spa

GP2 and GP3 review: Spa-Francorchamps 23-25 August 2013 The battle for the GP2 and GP3 crowns heated up in Spa over the weekend as once again the Pirelli-supported feeder series’ provided spectacular race action from start to finish. In GP2, it was a double victory for British drivers, with Sam Bird (Russian Time) and James Calado (ART) taking one race victory apiece. 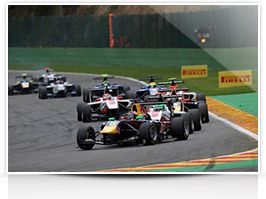 For one of the most demanding races of the year, the GP2 crews used the P Zero Orange hard and P Zero Yellow soft compounds while the GP3 crews used the hard compound only. Tyre blistering can be a problem on ultra quick circuits such as Spa, where drivers are on the throttle for approximately 80% of the lap, but the P Zero rubber coped extremely well with the high demands of the notorious Belgian circuit, despite varied conditions over the course of the weekend. A slightly modified version of Pirelli P Zero tyre was introduced for Spa, to best suit the particular characteristics of the track without changing the balance or performance, and help teams set up their cars in just 30 minutes. The new tyre coped perfectly with the high-energy demands of the seven-kilometre circuit all weekend. Saturday’s GP2 feature race was dominated by Bird. Starting from pole, Bird had an early advantage and despite Calado making a faster getaway, Bird was able to snatch the lead at La Source. A brief spell behind the safety car shortly followed when Daniel De Jong (MP Motorsport) crashed at Eau Rouge but it was soon all eyes on an enthralling battle for second place. Marcus Ericsson (DAMS) eventually went on to take the runner-up spot, seven seconds behind race winner Bird. Caterham’s Alexander Rossi came home in third. Next to take on the formidable Belgian circuit were the GP3 crews, which similar to the previous GP2 race was held in dry conditions. This time it was MW Arden’s Daniil Kyvat’s turn to shine as the Russian claimed his first ever GP3 victory after leading the grid from the off. Taking full advantage of the grip from Pirelli’s hard compound tyres, Kyvat held off mounting pressure from American Conor Daly throughout the 13 race lap and his debut victory has put him into winning contention of this year’s title. Daly finishing the race second, while Facu Regalia secured the third podium spot. 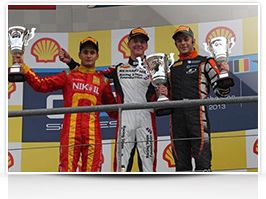 Calado won his first race of the season in Sunday’s GP2 sprint race. Starting from pole, Calado netted a string of fastest lap times and showed perfect tyre management from start to finish. It wasn’t all plain sailing however, as the Briton was chased by Julian Leal (Racing Engineering) later in the race who had initially protected his tyres in a strategy that could have paid off had the rain started to fall. Leal went on to finish second and third place was awarded to Hilmer Motorsport’s Adrian Quaife-Hobbs. Rapax driver Stefano Coletti used the soft tyre, which enabled him to make progress at the start of the race and move up to fifth from 13th before he slipped back. Calado summed his race victory afterwards: “The start was a bit iffy because there was water where the pole position was. So I let go off the clutch and didn’t go anywhere. I then backed up the throttle and it eventually gripped but I think I had the advantage of the new tyres. The first two laps were phenomenal. We made the advantage of the new tyres and that’s what made the race.” As is the case for GP2, the grid for Sunday’s sprint race in GP3 consisted of the top eight feature race finishers reversed. Starting in fourth place, Carlin’s Alexander Sims made a perfect start on a damp track and blasted through Turn 1 to take the race lead. Second and third place in the GP3 sprint race mirrored Saturday’s results with Daly and Regalia finishing on the podium once again. Pirelli’s racing manager Mario Isola commented: “Spa never fails to provide memorable race action and I’m thrilled that we had Alexander Sims and Daniil Kyvat taking their first wins of the year on such a difficult circuit. There’s no denying that Spa is one of the most physically demanding circuits in the world and it also puts a tremendous amount of pressure on the tyres. In GP2, we saw a number of race strategies and Calado said that he used the tyres to his advantage of Sunday’s sprint race – which I have no doubt helped him win the race. With only two rounds remaining this season now, both championships are shaping up for a thrilling season-finale as it’s still all to play for in GP2 and GP3.” The fight for the GP2 and GP3 crowns will continue in Italy in two weeks time as the crews travel to Monza (6-8 September). Copyright-free videos, photos as well as latest media news are available for editorial use from: www.pirelli.com/f1pressarea (registration required). Follow us on Twitter @Pirelli_Media and @pirellisport or Facebook: Pirelli Motorsport. Please also visit the Pirelli website for more information on the company: www.pirelli.com. For further information please contact: Alexandra Schieren +33 607 03 69 03 alexandra.schieren@pirelli.com Anthony Peacock +44 7765 896 930 anthony@mediaticaworld.com Francescopaolo Tarallo +39 334 684 4307 francescopaolo.tarallo@pirelli.com (Head of Product and Motorsport Communication)