Pirelli GP2 and GP3 compounds rise to the challenge of Barcelona

Just like Formula One, the GP2 drivers came to Barcelona with a whole step between the two nominated P Zero compounds – hard and soft – for the first time. During practice, the drivers used the hard tyre exclusively, in order to preserve the one set of soft tyres allocated to them for qualifying. In qualifying on Friday afternoon all the drivers came out straight at the beginning of the half-hour session, to benefit from the rubber that had been laid down on the track by the earlier Formula One practice session. Lotus driver James Calado – the winner of Pirelli’s GP3 scholarship last year – claimed his first pole position after finding a clear lap on the soft tyres, claiming four extra championship points. Championship leader and DAMS driver Davide Valsecchi could only manage seventh on the grid. The 37-lap GP2 feature race – held after Formula One qualifying – was won by Caterham’s Giedo Van Der Garde from Calado: both GP3 graduates from last year. The Lotus driver started from pole on the hard compound and then changed all four tyres in a pit stop on lap 13, at exactly the same time as second-placed Fabio Leimer (Racing Engineering), who also changed four tyres. Both were jumped by Van Der Garde at the pit stops, who stopped two laps later and changed only the two rear tyres to take the lead. Third-placed Coloni driver Stefano Coletti also used an effective strategy to boost himself up the order, gaining five places over the course of the race. Leimer subsequently lost track position after his team was judged to have released him unsafely into the path of Calado. The GP2 sprint race was held in cooler conditions on Sunday morning, with the starting grid formed of the top eight competitors reversed. Tyre management was again the key to a strong result with the drivers all using a new set of hard compound tyres as stipulated by the regulations. Arden driver Luis Razia won from pole position, looking after his tyres effectively to see off the challenge from Racing Engineering’s Nathanael Berthon, who dropped back at the finish. The GP3 Series, which got underway in Barcelona, only has three sets of the P Zero hard tyre available per car for the weekend. Portuguese driver Antonio Felix da Costa, who starred in pre-season testing, took the first pole position of the season for Carlin in the closing minutes of qualifying on Saturday morning. The first GP3 race took place straight after the GP2 feature race on Saturday, over 16 laps. Lotus driver Daniel Abt made an excellent start to take the lead from sixth on the grid from pole-sitter da Costa. But both drivers were penalised with a drive-through penalty for a jump-start, handing the lead and the win to New Zealander Mitch Evans. Halfway through the race the safety car came out, closing up the field, but Evans was able to get the most out of his tyres to pull out an extensive lead. Evans continued to lead the championship by a small margin after an action-packed race two on Sunday morning, while American Conor Daly took his first win for Lotus. Pirelli’s racing manager Mario Isola commented: “The GP2 drivers and GP3 drivers all coped very well with the huge challenge of Barcelona, which puts plenty of lateral energy through the tyres. The GP2 drivers had never experienced the soft tyre in Barcelona before, as we have only ever tested with the medium tyre at this track – but they adapted to this new experience very well, with Van Der Garde using a different strategy to his rivals to win the race. The challenge for the GP3 drivers was to get the most out of their tyres over an entire race distance, which was not easy with the high temperatures and abrasive surface in Barcelona. Evans was able to manage his tyres perfectly despite the appearance of a safety car in race one. Sunday’s races were held in much cooler conditions, around 10 degrees less than the temperatures we experienced on Saturday, and that obviously had a big effect on tyre behaviour. Again, the drivers in both championships dealt with this different challenge extremely effectively.” The GP2 and GP3 Series resume in the Principality of Monaco from 23-26 May: the highlight of the calendar for both Pirelli-equipped feeder championships. 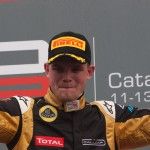 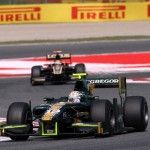