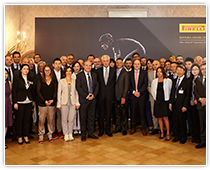 Pirelli has named its 2017 Supplier Award winners. The company, who have shone throughout last year, delivering on-time quality to the supply chain or end product, came from three continents – Europe, Asia and America – and six countries (China, Italy, Germany, Japan, Romania, the United States, and Thailand). In the sixth year of the annual awards are the suppliers of primary materials who have been the most successful, scooping four prizes of the nine available. This emphasis is justified by the numbers: 46% of Pirelli’s total expenditure (equivalent to 1.54 billion euros in 2016) goes towards primary materials. The recipients of the awards, as well as primary materials suppliers, included producers of machinery and moulds, cyber security experts, logistics firms, and event management companies. The 2017 Supplier Awards winners are: Jiangsu Xingda Steel Tyre Cord Co Ltd (China), one of the premier producers of metallic reinforcements; Cabot Corporation, a US firm, which is a leader in carbon black production; Zeon Corporation, a Japanese company that supplies synthetic rubber; Thai Eastern Innovation, an important producer and exporter of natural rubber headquartered in Chonburi; Karl Eugen Fischer GmbH, a German supplier of tyre production machinery; Himile Mechanical Science and Technology, a world leading supplier of tyre moulds; Com Divers Logistic Srl (Romania), a key player in the logistics sector; Reply, an Italian firm specialising in cyber security and IT services, and finally Newtonlab, an events company from Italy. Pirelli executive vice chairman and CEO Marco Tronchetti Provera, as well as Pirelli’s head of purchasing Pier Luigi de Cancelli presented the awards at a ceremony that took place at the Italian firm’s headquarters in Milan.
Newsroom