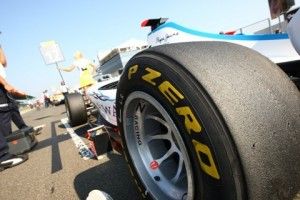 Spa-Francorchamps, nestling in the foothills of the Ardennes, is an epic drivers' circuit that has produced some memorable on-track battles for several years. With legendary corners such as Eau Rouge and Blanchimont, the track is an awesome test of bravery and skill. This weekend the GP3 drivers - the Formula One champions of the future - get the chance to experience one of the most thrilling circuits in the world, running on Pirelli tyres. Pirelli, which recently tested its Formula One tyres for the first time, is supplying the inaugural GP3 Series with control rubber this year, putting the emphasis firmly on driving talent. With 30 identical 280-horsepower cars on the GP3 grid, all the young drivers get the same chance to impress in front of Grand Prix crowds. As well as the sustained high speeds, one of the biggest challenges posed by Spa is variable weather. On occasions, it can even be raining on one part of the circuit while another part of the track is completely dry. There is a reasonable chance then that the drivers will get to use Pirelli's wet weather tyres at some point during the weekend, which so far have only seen competitive action in Hockenheim. On each round of the GP3 Series, drivers are allocated three sets of PZero dry weather tyres and two sets of wet weather tyres. For the complex demands of the Spa circuit - situated only an hour down the road from Trier in Germany, where Pirelli was competing on the World Rally Championship last weekend - the Italian tyre firm and the GP3 Series organisers have opted for the medium compound tyre. The medium tyre will also be used for the next and final race on the GP3 calendar in Monza next month. This 13-inch tyre, which made its debut on the first round of this year's GP3 Series in Barcelona, was chosen for its adaptability in view of the wide range of conditions likely to be encountered in Belgium. While it is rare to have a Belgian Grand Prix weekend with no rain, warm temperatures in August are equally possible. Pirelli's Racing Manager Mario Isola explained: "As is often the case in motorsport, finding the right tyre for Spa was a question of identifying the best compromise. We are expecting rain at some point, so there is a good chance that we will use the wet tyres for at least one of the sessions. Equally, if it is warm, the soft compound tyre may not be ideal for high temperatures. The medium tyre is well-suited to the characteristics of Spa, which include high speeds and considerable loads on the tyres, although the surface is not especially aggressive. We're entering the closing stages of the championship now, with just four races remaining. Naturally, we can expect all the drivers and teams to be trying their hardest to improve their positions during this crucial period. Our aim is to give them a stable and competitive tyre to help them do this." The new GP3 Series has been designed as a feeder series to GP2, which will also be supplied by Pirelli next year, with the Italian firm providing a ladder of talent capable of taking young drivers all the way to the very top of single-seater racing. Mexico's Esteban Gutierrez continues to lead the GP3 Series by 30 points from Robert Wickens.In the teams' standings ART Grand Prix heads Status Grand Prix by 50 points. Practice for GP3 takes place on Friday 27 August, with qualifying and race one on Saturday 28 August. The second race takes place in the morning of Sunday 29 August, with both races lasting half an hour.
Newsroom