PIRELLI HEADS TO THE GOLDEN STATE FOR INTERCONTINENTAL GT FINALE

Pirelli is heading to America’s ‘Golden State’ this weekend for the California 8 Hours, which marks the end of this year’s Intercontinental GT Challenge. A variety of the world’s most prestigious car manufacturers will compete for the coveted global title: all running on Pirelli P Zero tyres.

The challenge:
The race will take place at the iconic Laguna Seca circuit, which is 3.602 km long, featuring sweeping elevation changes and 11 corners. The circuit’s signature turn is the rollercoaster Corkscrew: one of the most recognised corners in all of motorsport, which tests handling to the very limit. The California 8 Hours is the longest race ever to be held at Laguna Seca, intensifying the challenge.

The competitors:
Either Mercedes-AMG or Audi could take the title this weekend, with Mercedes currently nine points ahead.In the drivers’ championship, it’s equally close. Raffaele Marciello and Tristan Vautier lead fellow Mercedes driver Maro Engel by 15 points. Audi’s Markus Winkelhock and Christopher Haase are 18 points behind the leading Mercedes duo.Bentley and Porsche are also represented in California: all four marques use Pirelli tyres as original equipment for their road cars as well as their race cars.

The product:
Pirelli is sole tyre supplier for the Intercontinental GT Challenge and the GT3 drivers will be using the P Zero DHD2, while the GT4 drivers make use of the P Zero DH tyres. Although it’s just one compound, these tyres have been designed to work with all the cars on the grid from a variety of manufacturers. There are 33 entries in total, including two other categories: GT Cup and TCR.

The strategy:
The title may be ‘endurance’ but it’s effectively a series of long sprint races, such is the pace. Tyre changes are expected after every stint for those targeting peak performance, especially as the action takes place in the heat of the day on Sunday, following the start at 09:15. Those planning a different strategy may try longer stints.Each driver is allowed a maximum cumulative driving time of 195 minutes, and the maximum duration of each stint is 65 minutes.Fuelling and tyre changes aren’t allowed to be carried out simultaneously in the pits. Pit stops that include refuelling must have a minimum duration of 101 seconds: for tyres only it’s 50 seconds.

The tyre rules:
Each car will get 10 sets of Pirelli slick tyres for the weekend. An additional set of tyres will be given to the cars qualifying for the pole position shoot-out.

Pirelli quote:
Matteo Braga, circuit technical manager: “Across the other three rounds of the championship held so far this year – in Bathurst, Spa, and Suzuka – there has been some extremely closely-fought racing, and we’re expecting the same again this weekend. Laguna Seca is another challenging circuit for drivers, cars and tyres, with the strategy also dictated by the weather conditions. We expect quite big differences in temperature between morning and afternoon, which means that different levels of performance will need to be managed throughout the race.”

Watch qualifying and the race on www.intercontinentalgtchallenge.com 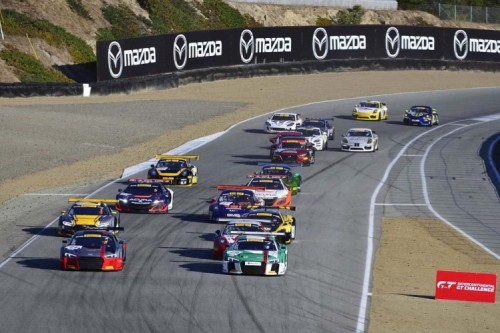 PIRELLI HEADS TO THE GOLDEN STATE FOR INTERCONTINENTAL GT FINALE