PIRELLI HEADS TOWARDS THE JEWEL IN THE CROWN OF GT RACING

For the fourth consecutive year, Pirelli will be the exclusive supplier of the FIA GT World Cup, held on the epic Macau Guia circuit: one of the great tracks in motorsport history, where legends such as Ayrton Senna and Michael Schumacher began to make their name. The FIA GT World Cup pits the greatest GT drivers in the world against each other, with the inevitable outcome of action and drama. Two years ago, Laurens Vanthoor won the race for Audi despite finishing on his roof: last year, the track witnessed one of the most spectacular pile-ups ever seen in a major international race. For those who get through it and win, the prestige and glory are world-renowned: one of the main reasons why Pirelli throws its weight behind this unique event, featuring all the top manufacturers.

Who's taking part?Pirelli equips around 50% of all the prestige and premium cars sold: the top end of the market, making the Italian firm the leader in this sector. Many of these top brands are represented in GT racing and at Macau with some of the best-known drivers out there, including newly-crowned Blancpain GT champions Maro Engel and Raffaele Marciello. Also on the entry list is two-time Le Mans winner Earl Bamber, who will drive a Porsche, while Macau ‘GT King’ Edoardo Mortara will drive for Mercedes, former F1 tester Robin Frijns takes the wheel of an Audi, and touring car star Augusto Farfus will drive for BMW – to name but a few. All these manufacturers use Pirelli P Zero tyres on the road as well as on the track, underling the holistic partnership between Pirelli and the world’s top car makers.

How does it work?The FIA GT World Cup consists of a 12-lap Qualification Race at 13:05 on Saturday 17 November (to determine the polesitter) and the 18-lap main race at 12:25 on Sunday that will crown this year’s FIA GT World Cup champion. Unlike most GT races, there’s just one driver per car. There’s also free practice on Thursday and qualifying on Friday.

Which tyres is Pirelli bringing?For the first time, Pirelli will bring the P Zero DHD2 for the provisional grid of 15 cars, featuring five different manufacturers. Pirelli’s Cinturato WH tyre will also be on standby in case of wet conditions. Both types of tyre have been tried and tested throughout a variety of different GT races all over the world, featuring the latest technologies from Formula 1: where Pirelli is also sole supplier.

What's the circuit like?The incredible 6.120-kilometre track has been described as a mixture between Spa and Monaco, containing 19 corners, some fast straights, a flowing mountain section, and the tightest hairpin bend of any circuit in the world. Weather can be variable, ranging from sunshine to heavy rain, and the surface is also mixed with different levels of grip. Put together, it adds up to an awesome challenge. As a street circuit, the track is constantly evolving: the drivers often say that no two years are exactly the same.

Macau in numbersThe GT3 cars put out between 500 to 600 horsepower, achieving a top speed in the region of 280kph on the straight, following a rolling start. Each one weighs around 1300 kilograms, depending on the balance of performance. The tyres are made in a state-of-the-art facility in Izmit, Turkey, before being transported 8000 kilometres to Macau – an autonomous region of China that contains more major casinos (41) than Las Vegas. Each car is allowed to use five sets of slicks and three sets of wets over the weekend.

Quote:Matteo Braga, circuit activity manager: “Macau represents one of the biggest challenges on the GT calendar, combining a huge variety of different characteristics into one long street circuit. It’s safe to say that there’s nowhere else like it in the world, and the weather conditions are as unpredictable as the race outcome. This is the first time we’re using the DHD2 in Macau, which will reward the drivers and teams able to get the best out of our updated product as quickly as possible in these unique and varied conditions. You don't get to test in Macau – it’s straight into free practice – so the drivers will have to get to grips with its characteristics as soon as they can, on a circuit that is all about confidence. Once again, Macau has attracted some of the top GT drivers in the world, which means that we should be in for another thrilling weekend of competition.” 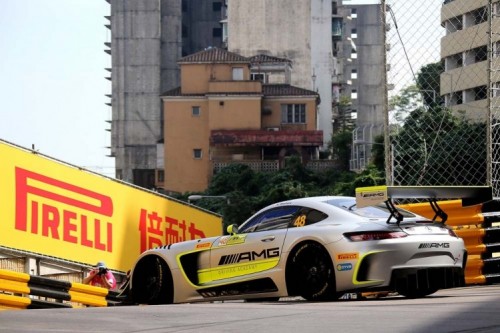