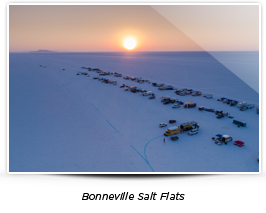 The passionate mastermind behind the “Bologna to Bonneville” project, Engineer Fabio Fazi, rode the Malossi-powered Benelli to the first two records achieved on Sunday, 27 Augustin the 50cc category. Fazi, who is an FIM Bureaux Technical Commission member and a proud affiliate of the Moto Club Benelli, reached a top speed of 114.823 km/h (71.347 mph) across 1 kilometer and 71.294 mph (114.737 km/h) across 1 mile, both speeds representing an average of two runs in both directions.

"I had been to Bonneville just as a spectator, but as a participant you learn how to know the hardships," said Fabio Fazi, pleased with his achievement. "I am very happy to have personally achieved the record in the 50cc category. The scooter performed great and now, after the victory, we only look forward to returning with the same machine to beat our own record."

The next four World Records were set on Wednesday, 30 August, by former World and Italian Superbike rider and now Sky Italia MotoGP™ Commentator, Mauro Sanchini. While Sanchini flew direct to the USA from his commentary box at the British Grand Prix at Silverstone, England, Malossi technicians prepared the 85 and 100cc engines ready for the Italian’s arrival. Sanchini, who started his career racing scooters for Malossi in the 1990s, made an emotional return to Malossi to set four World Records with a speed of 133.002 km/h (82.643 mph) across 1 kilometre and 82.436 mph (132.668 km/h) across 1 mile for the 85cc and 142.088 km/h (88.289 mph) and 88.181 mph (141.914 km/h) respectively for the 100cc.

"I am delighted for the great results we have achieved," said Mauro Sanchini at the end of the record-breaking day. “It has been a great experience in a place that every biker must experience at least once in life. Thanks to Pirelli, Malossi and Benelli and all the guys of the team for their efforts in making all the necessary changes for this strange track. When you ride on salt you really understand the challenge, which adds even more value to the records we've reached. Now the challenge is to improve the result!"

Testing Department Director of Pirelli Moto, Salvo Pennisi, who had accepted the original challenge from Moto Club Benelli, commented: "Chasing World Records is not new to Pirelli. Since 2000 we have achieved 21 World Records and with these six records we will enrich our haul! We were requested to participate in this adventure and immediately agreed. The timing was perfect considering the fact that this year we introduced the new DIABLO ROSSO™ Scooter tyres and we were confident that their performance could play a vital role in achieving this challenging and passionate goal."

About the Bonneville Salt Flats The natural Bonneville Salt Flats International Speedway is a plain in the northwest of the Utah State that in summer is covered with a layer of salt as a result of the evaporation of the prehistoric lake, which in summer can reach a thickness of almost two metres. While in the winter season the lower evaporation leaves water partially covering the layer of salt, in the spring the water begins to evaporate. In the summer, the winds help to smooth the expanse of salt giving it a hard surface, preventing any plant growth and making it an ideal location for land speed records. The World Records obtained during the Bonneville Motorcycle Speed Trials are recognized and certified by both the AMA, the American Motorcycle Association and the FIM, the International Motorcycling Federation.