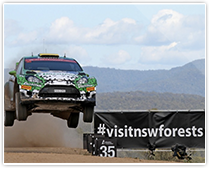 On the debut of the new hard compound KHA Reinforced tyre and KSA Reinforced soft compound, on the all-gravel Rally Australia, Pirelli claimed a win in the Production section and nearly clinched the WRC2 class. Rally Australia, based in the Coffs Harbour area, is one of the trickiest events on the WRC calendar, featuring a mix of fast and twisty gravel roads on a hard base, in very warm temperatures. The complexity of the event prompted Pirelli to introduce the latest KHA and KSA Reinforced compounds under the FIA’s “joker” regulations, allowing tyre manufacturers to upgrade their products during the season. In the end, because of the high ambient temperatures, only the hard compound was used in Australia. Pirelli-equipped drivers put in a strong performance: only a 10-second jump-start penalty and a delay caused by cows in the road prevented Ukrainian driver Yuriy Protasov from winning the class, against the experienced Nasser Al-Attiyah in the latest Skoda Fabia R5. Protasov, in a Ford Fiesta R5, was a frontrunner from start to finish, against very strong opposition. Local man Nathan Quinn also won the Production section on Pirelli tyres in a Mitsubishi Lancer Evo 9, beating Australian champion Scott Pedder. Quinn was also fourth overall in the WRC2 class and top Australian. Pirelli’s product manager Terenzio Testoni said: “All our drivers were happy with the new Pirelli product, finding it to be more resistant to impacts and wear compared to its predecessor. Even in the longest stage of the rally at 50 kilometres, run in temperatures of 25 degrees centigrade, our tyres experienced no problems with no blistering seen either. The new KHA was equally effective on the very loose surfaces, characterised by small stones, of the third day of the rally; capable of providing grip even in the most slippery sections.”